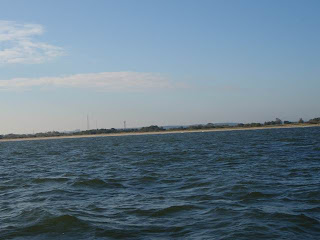 Here is a quick shot of "Sandy Hook" New Jersey.

This is one of the most talked about sand spits on our planet. Poised at the outer end of New York Harbour it's passage marks the first time most lake sailors hit salt water.

Not much to look at is it?

So many sailors have encountered poor or changeable conditions sailing from Sandy Hook south along the New Jersey Coast that we are all filled with a vague feeling of malaise as we enter the ocean.

I explain to my American friends that this is what it is like to be Canadian.

Our run last night, September 29 was a dream. Waves were 6 to 8 feet and the wind circled behind us at 10 knots cycling from east to west and back again several times. Each time we set the mainsail and preventer for running with the wind it changed direction. It felt like sailing on an America's Cup boat - "time to gibe boy's, only 87 more on this leg!

Departing Great Kills, NY at 7:30 a.m. we dropped hook in Cape May at 2:30 a.m. next day. This was very good time for us averaging more than 7 knots the entire trip.

Connie was awakened at 4:00 a.m. with radio chatter informing us the C & D Canal was closed as an oil tanker had run aground mid canal. The bad news was that if the canal remained closed we were faced with another length 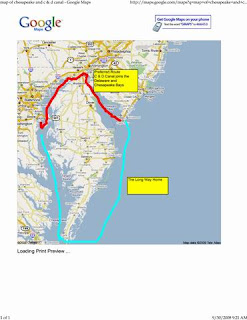 y coastal run to the Chesapeake. As you can see we prefer the bucolic pace of the Inland passage (red passage). It is shorter too.

The good news was that she did not wake me up to tell me. I found out next morning by which time the barge had been towed off with no hydrocarbons spilled.

One of the few highlights of this run is seeing Atlantic City from offshore. If I were a better photographer you could share this interesting sight.

Must be that new camera. :) 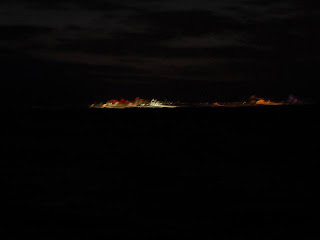