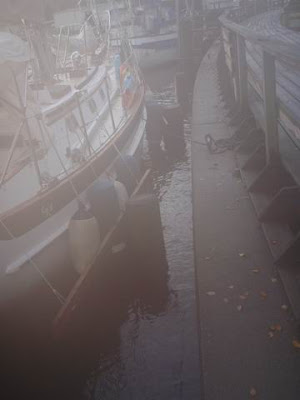 From this you can discern both this morning's weather and last night's difficulty
Still in Elizabeth City NC.
Oct 28, 2009 8:30 a.m.

Meredith found herself staying yet another night in Elizabeth City NC. The unpleasantness of yesterday's dawn bled into a panorama of "slight chance" of rain. Rain is not a matter of probability. It is a 100% or a 0% matter. Either it is raining or it isn't. Yesterday it was.

Meredith is waiting for a new sail to be completed by the Doyle loft in Annapolis. We plan to be in Beaufort on Friday to rent a car and pick it up. Once installed we will take the boat offshore at Beaufort and sail to Charleston in a two day avoidance of the twisty inland watersNorth and South Carolina.

Not being in a hurry we spend another day in EC waiting for the forecast 20 knot SW winds to pass the Albemarle. Whenever possible we avoid winds right on the nose and nowhere do we do this more fastidiously than when approaching the Albemarle.

While the Budget Committee did laundry I spent the day getting to know Peter aboard Kinvara. Nominally we were troubleshooting his nav lights which would not turn off. Peter had installed new Led Bulbs in his nav lights and discovered that when he turned his lights off they still shone just not as brightly. An unexplained and uncontrollable current loss was afoot but the voltage was so low (1.5 volts) that it was not detectable when incandescent bulbs were in the circuit. The low volt low current LEDs were different. Any uncontrollable current drain is worrisome in a sailboat which relies so heavily on its battery bank for convenient living.

Connie and Jane, Peter's wife, viewed the Albemarle museum and went to a wine and cheese party while we stumbled through the project.

Other people's boats take a good deal of getting used to before you become comfortable with their systems. You would love to rip the boat apart and get a good feel for her systems but of course the boat is owned by another guy. A guy you like and who might not know you well enough to trust you to take his boat apart on him. Worse, he may know you well enough never to let you near his boat with a screwdriver in hand.

Peter's boat is a French built Jeanneau, a lovely boat but the French had different wiring standards than North America. Guys will understand the confusion that is generated when you see 5 yellow wires and 5 red wires all running to a DC common bussbar. Yellow wires are negative. Red wires are positive. The two are never connected directly to each other. They are joined through a "load" like a light bulb or fan.

By day's end we had isolated the errant current source to a badly wired aftermarket cigarette lighter plug. Not Peter's doing. A bit of wiggling and the nav lights went dark.

Today I am going to return to Kinvara with some parts so we can properly repair the damage done by two well meaning but slightly ham fisted and confused pseudo electricians.

Last night we suffered some sea rage on the wall to which we are tied. The wind pattern although light coming into EC had a great long fetch and the wave pattern struck Meredith just aft of the beam. The waves then bounced off the concrete wall to which we were tied and rebounded against Meredith's other side. When two waves meet the wave amplitude (height) is the sum of the amplitude of each of the two waves. Then of course the waves reflected from Meredith back onto the wall and then back onto Meredith.

About 2 a.m. the boat's motion was so pronounced that the bow fender board rode up and over the pylon from which it was fending off. The board came down on the other side of the short pylon. Rather than fending off the fender board was actually holding Meredith tight to the pylon aggravating an already unpleasant grinding away.

In 10 minutes Connie and I were both awake and 3 minutes later we were standing on the concrete wall retying the fender boards "extra" low to prevent a recurrence. Luckily Meredith has a tough rub rail and suffered no damage from the attack.

In Elizabeth City Meredith is tied to a concrete wall with two short pylons sticking up to keep the boat off the wall.

It is impossible to tie up to a pylon using just fenders. Fenders are not long enough even if you tie them lengthwise. In tidal waters you cannot tie lines tight enough to hold your boat stationary against the pylons. The boat moves forward or aft and then your fender is no longer between you and your boat. The solution is fender boards: 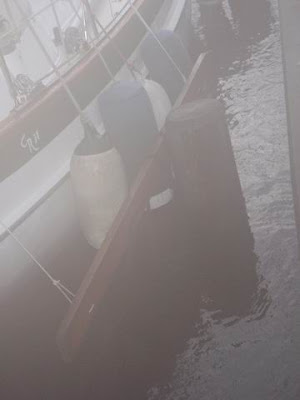 Meredith carries a pair of 2 x 6 inch boards painted with Cetol. During normal sailing and anchoring these boards are fixed to the stanchions and we tie the jerry cans of fuel, gas and water to them.

If we tie up to a wall the boards are removed and hung overboard at the pylons over top of three or four fenders. In this way you have an 8 foot surface to run along the pylon ensuring that your boat does not suffer undue damage.

Soon the sun and wind will rise and the fog will burn off and blow away. By then the wind will have kicked up the Albemarle so we are going to while away another day in EC.

Most readers will be aware of our opinion of the lousy canvas work done for us by Genco Marine of Toronto. Today's pictures were taken in clear air not behind the clear plastic windows in our enclosure because had we taken pictures through the those plastic windows in the overcast/drizzle/fog conditions you would have seen little.

Most canvas installers will offer customers a range of clear plastic options from base to the ultimate "Strataglass". Strataglass is high maintenance and expensive but very clear. 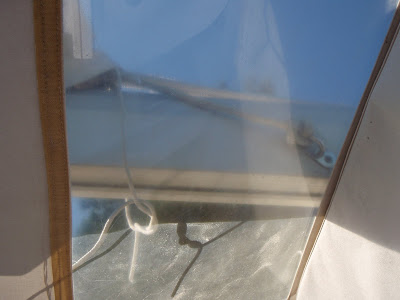 The image that looks like shadow is not shadow - it is indelible flaws in the material. Not on the surface in the middle of the material. This is on a clear sunny day.

After three days of sewing all of the dodger by hand Connie is still left with this to finish: 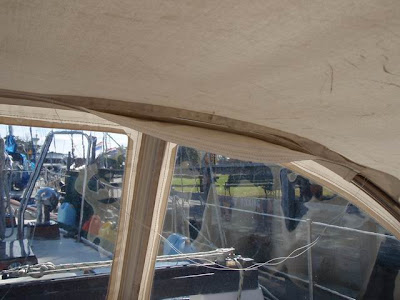 All of the thread is rotted out. Every stitch has pulled out. This is after 5 years. 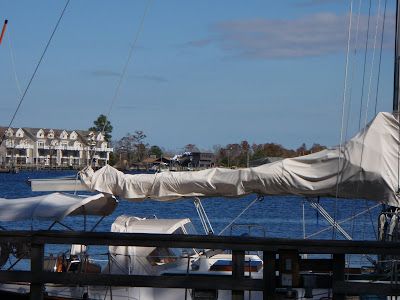 Just because you have a 14 foot boom does not mean you should also have a 14 foot mainsail cover. It is so much classier to hike your main up around its armpits like an old man's trousers. 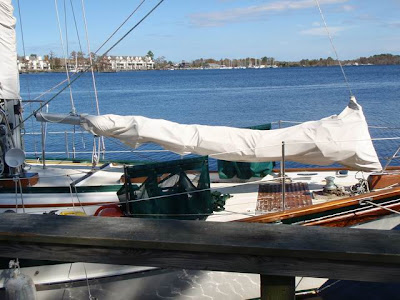 applies to the staysail boom. Good Genco design practice indicates a 10 foot staysail cover is most attractive on a 12 foot boom. Sort of looks like "floods" or dork pants.


There's more but I have bored you enough.
Posted by Unknown at 4:44 AM