Finally Some Perspective, or as I Said to My Date: Your Paranoia or Mine 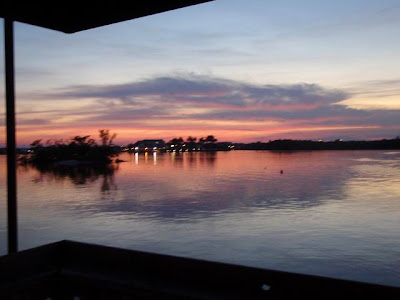 The View from the Porch of the Riverside Bar, 200 metres from Meredith.

Pulling into the Siren Marina at Vero Beach FL you feel the attractive force working over your psyche.

"Meredith, This is Vero Beach Municipal Marina. You are on Mooring Ball #4 just off your Starboard beam. Welcome Back"

"Welcome Back?" This is the first kind word spoken in our general direction since Meredith entered Florida. It got better.

Our gameplan for Vero had grown considerably in size and scope since we were unable to effect any repairs or improvements to our boat in Green Cove Springs. It was too darn cold. In consequence we found ourselves planning spares lists and phoning parts orders for delivery to Vero all along the ICW from Green Cove. The marina at Vero is a secure place to have things delivered.

Day 1, our first ashore in a week of slogging along the boring and frigid inland waterway of Northern Florida, was spent gloriously basking in the luxury of land based services. Long slow showers were followed by big breakfast at Toojays, a $5 first run movie at the Indian River mall and a stroll in warm weather - inside the mall.

We were back to work on Wednesday. Sort of. Connie needed to source out some much needed linen for the boat and I had a need for some 1/2 inch waterline and fittings for the fresh water pump.

Climbing on the No. 1 bus we realized that some changes had indeed inveigled their way into the Vero Beach Experience. The buses were new.

Gone were our old favourite characters: the one legged mother, freaky cell phone guy and the sacary spiky haired guy. These were no where to be found. Hopefully all were in a better place although I fear Spiky Hair Guy might be incarcerated somewhere.

In their place we had new regulars: Bubbles, Rusty and Zula, the last named after the Grace Jones role in Conan the Destroyer. Bubbles, if you have seen only one episode of Trailer Park Boys needs no introduction. Zula, baby in hand and warrior glare fixed in place had her hair pulled well up her forehead and had piled it in a ring of spiky monuments surrounding her face. I will get to Rusty in a minute.

These are new regulars on the bus and were welcomed by the Budget Committee and me without reservation. We in turn were accepted. There is an inclusionary atmosphere on the bus - unless you want to get all superior. Most cruisers participate.

Let me give you some examples:

Rusty had an outside seat one row in front of us.

As the No. 2 came to a stop at the Courthouse, Rusty was out of his seat in a flash. No fuss, no commotion just efficiency of movement which is difficult in a man carrying as much extra weight in as many odd places as Rusty. Before I realized it a single mother climbed aboard the bus, baby in arms. There only 6 feet from her was an open seat. No one to thank as Rusty had made sure he vacated early enough that the mother would not be embarrassed at someone making this somewhat tarnished time honoured courtesy available to her.

Two stops later there were some empty seats. A mother climbed on pulling a three year old boy. The boy had trouble focusing his eyes. As the mother passed the third row of seats the boy spotted a baby girl sitting with her mother. He immediately made a fuss, wanting to see the baby. His mother, frustrated and obviously tired, tugged at his arm. As the mother did this the the woman sitting in the aisle right in front of us climbed out of her seat and moved to a new seat at the rear of the bus. The boy was pacified and happy looking at the baby one seat ahead of him.

Simple things. Small acts of courtesy demonstrating a sensitivity to the needs of others and a willingness to help that had not been in evidence in this bastion of flowing white hair and privilege called Florida.

Returning from the mall that day our old friend, Leonard, one of the bus drivers was driving our bus and we shared a homecoming. Leonard seemed as glad to see us as we were to see him. For 10 minutes we caught up on old news and children. His son graduates from college this spring and that will be a relief to Leonard. Our son, same age, just left home on another grand adventure.

At the transfer point we had another 10 minutes to catch up and we will ride the bus on Monday because Leonard is driving our route that day. We are looking forward to it.

It was nice to find ourselves in a friendly and accepting place. It is rare in Florida. Vero is a real treat.
Posted by Unknown at 1:43 PM