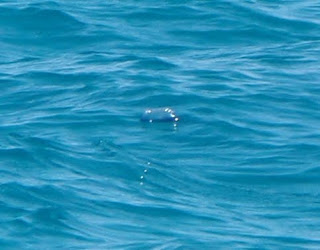 Where is Francis Drake When You Need Him?
Portuguese Man O' War Advancing on the Starboard Beam
Nearly Across the Florida Straits 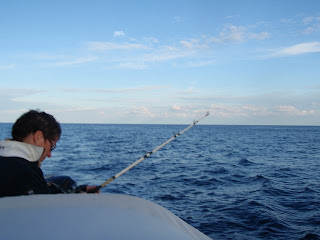 The Budget Committee Sets our Fishing Rod - Gift from Good Friends Ben and Andree
Yesterday's blog had Meredith leave Ft. Lauderdale Saturday the 20th of February in a 32 hour nonstop to Royal Island.  Royal Island was chosen as the best anchorage in a hard blow and a cold front was forecast for the evening of our arrival on the 20th. 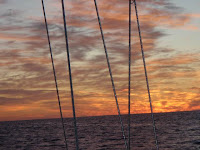 The photo to the right shows the sky dawning on Sunday.   As we would say on Meredith "Bad Canary.  Bad".  Sailors prefer bright sky harbingers only at night.


The anchorage earned it stripes again as after the front passed on Sunday night we waited out an "unforecast meteorological event" lasting 24 hours with winds sustained at 25+ knots gusting to 35.  That is gusting if you consider 15 minute unrelenting assaults "gusts".  Fortunately Royal Island has 360 degree protection from waves and good holding.  We slept with only the usual intermittent arousal to complete the obligatory early morning evacuation of bladders.  Others were not so fortunate.

On the evening of the 20th a catamaran anchored close by Meredith dragged.  The Budget Committee saw the boat moving and when no one appeared to remedy the situation radioed the cat.  We are not sure if the cat had its radio on or if the boat's unintended motion finally woke the crew but frantic corrective action ensued almost immediately.  Sadly the dragging was only the canary in the mine for the cat.  By 2 a.m. in increasing winds the spreader lights went on on the cat and the crew was forced to reset the anchor.  We say forced  because no one goes to the bow of a boat riding the way that cat was riding without compulsion.  Thereafter the engine and spreader lights on the cat remained on til dawn.

By Tuesday the 22nd the storm had blown itself out.  A new cold front was forecast to rampage through the area on Wednesday.  Meredith had not cleared customs or immigration so crew could not disembarque and we continued to fly the Q or yellow flag.   We had communicated with no one since our departure on Friday/Saturday.

Governor's Harbour on Eleuthera Island was selected as our Port of Entry.  It was a reasonable day sail from Royal Island so we could make the sail and still clear in during normal office hours.  Not having cruised Eleuthera we were looking forward to the landing.  Nor were we disappointed. 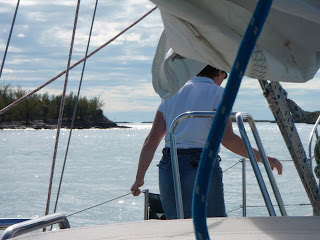 Connie Goes to the Bow as Meredith Approaches "Current Cut" 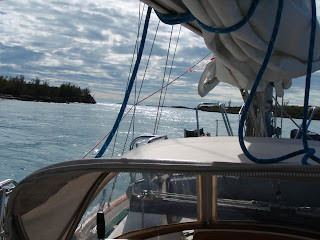 This is the Cut.  At max Ebb or Flow the current through "Current Cut" runs to more than 5 knots.  We timed our approach for an hour after high tide.

Enroute we came upon the "Current Cut" a 2 boat length wide passage between the South tip of the northern lobe of Eleuthera and the north tip of Current Island.  The current does not refer to juicy berries that might be expected to grow on the island but to the 5 to 6 knot tidal flow that rips around the island and through the cut at mid tide (changing direction with the tide of course).  This was a livening experience and helped keep the crew awake.

The Budget Committee took the bow but found herself short of work.  Depths in the cut were 40 to 60 feet and the tide kept the bottom scoured.  No problem with shoaling let me tell you.  This has to be one of the few places in teh Bahamas where a visioned person cannot see the bottom.

Reaching Governor's Harbour juts before 4:00 p.m. we cleared in at the container dock.  This had to be one of the friendliest and most efficient clearings in we have experienced.  Bahamian procedures are light years ahead of Canada Customs and  Immigration.  For one thing all of the agents are English as a first language, near the reverse of back home.  The Immigration agent answered the phone while we waited "Bahamian Immigration.  How Can I Help You?".  You could hear the smile over the phone lines.  The Customs agent, very young, was thorough but personable.  Discovering our boat was registered in Toronto he informed us he was set to leave for Toronto for a week visit with his girlfriend who was in Canada attending university.  He was a bit concerned over the temperatures until I explained the way to deal with the cold was to stay indoors, preferably in a nice warm bed.  I perceived his mood improved.

Eleuthera is our kind of place.

Having cleared we moved to the anchorage right off the town, dropped the dinghy and then  the outboard.  It was now Tuesday and we had left friends and family in the dark as to our whereabouts since Friday.  We needed internet  or telephone.  Thankfully Governor's Harbour had a Batelco (Bahamas Telephone Company) office.

This blog has gone on too long and the telephone call will be concluded tomorrow.
Posted by Unknown at 6:40 AM