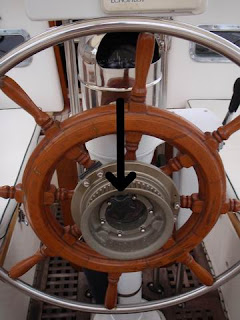 The cause of all my troubles.
We had come around the Cap de Gaspe, sailed past Perce and were headed for Chandler, QC in the Baie de Chaleur.  Despite the cold and rain and 6 foot short frequency swell out of the east we were in good spirits.  Perce was a lift to the spirits and the coastline is like no other.

Sol was declining in the west and temperatures were low.  The Budget Committee had gone below to prepare some hot food to sustain us through the remaining couple of hours til landfall.  Meredith was about 8 miles offshore to avoid fishing nets.

Out of Grande-Riviere emerged a fishing boat in the style preferred by the Gaspe watermen: smallish, well maintained and neat in appearance, colourfully painted, this particular vessel in dark blue with white pilothouse.

For some reason the skipper of the fishing boat headed right towards us.  His throttle was full forward and he was throwing a big bow wave.  As do all sailors I consider a big bow wave to be inversely proportional to penis size so I was not impressed.

Assessing his trajectory against that of  Meredith left no doubt in my mind that we would pass well ahead of this tiny juggernaut of the sea.  Or would have until the pilot altered course.  Naturally the new course was one of collision with my vessel.

Twice more did the diminutive fishing vessel adjust his course to ensure he and I would meet midbay.  Meredith was running on her rock solid autopilot so there was no chance of my being  involved in anyway with what appeared to be a developing game of aquatic chicken.  I guess you would call it a game of Tuna, that being the piscine equivalent of our egg producing but non flying feathered friend.  (chickens cannot fly of course but I have no idea what you call a fish that cannot swim - Bob perhaps?)


As the unknown sailor approached I fixed his vessel square in the binoculars. The boat was flying only the flag of France.  France!  Clearly the pilot was deranged or at least mentally deficient.  I mean, France?


The Budget Committee remained below, fully occupied by her duties in the galley and I suspect, fully enjoying the heat of the cabin.  Thank Goodness she was not on deck.  She would have been concerned.

As every man knows when challenged by another male the only acceptable response is contestation.  You push your finger into me and I shove you back.  We both puff out our chests and come what may.  No surrender, even if you are bluffing.

So the script was written.  It occurred to me that this could number among my last opportunities to defend what was left of my descending manhood - the balance of same declining in the western sky as the sun of my universe slowly set.  OK.  Let's cut the maudlin trash.  I was pissed and this guy wasn't going to push me around.   The Budget Committee wasn't around to stop me and as we all know she is the only one who can push me around.

Slowly, inexorably our vessels converged, neither skipper willing to budge (but I did not have to, I got here first, right?).  It was going to be close.  My skin temperature rose as my heart pumped faster and faster.  I could take my pulse by listening to the flow of blood in my skull.  This was it.

Again I looked at the French flag flying so cockily on the stern of my nemisis.  I peered into the pilot house trying to guage the alloy of the man at the wheel.  It flashed through my brain with all the clarity of a message from the gods that he would blink.  I knew it.  He was a bully and he would not risk the collision.  I knew this for a certainty.

The certainty of victory freed my mind to deal with enhancements to said win.  It is never enough to just win.  You must destroy your opponent, much like the Romans in Carthage in the second Punic war.  As our vessels closed, Meredith still on autopilot I undid my belt and lowered my fly.  I would moon this twisted little wannabe Frenchman as he passed to my stern.  That would cement my position of supreme male on these waters!!!

As the boats closed the swell which had pursued Meredith all the way from Riviere aux Renards chose to exhibit an anomaly.  One wave, timed exquisitely to match the lowering of my fly, threw me off balance.  I fell forward.

My fly caught on the little black tightening knob located on the steering wheel, a clutch knob.  This knob fixed the drum tight to the wheel so the windvane could steer the boat.  The knob worked.

The wheel pulled to starboard pulling poor Meredith directly into the path of the aggressor fishing boat, which was now only yards away.

But... But...the autopilot was engaged and it pulled the wheel back again fighting to maintain the heading I had programmed in hours earlier.  This exerted both an upward and a sidereal force on my pants the clutch knob moving freely in the  fabric.

The French Flagged vessel passed.  It must have seemed to him like I veered into his path just as he had given way to Meredith.  Little did he know that it was all just a big misunderstanding.

His wake however had the autopilot dancing a jig trying keep the boat's heading true and the autopilot worked the weasel that had invaded my pants oscillated and me with it.  I was giving my personal interpretation of Elvis' Blue Suede Shoes.

Being tossed about without warning was not well received by the Budget Committee who was amidst some delicate operation in the galley.   She voiced her concern.  I yelled it was wake from some madman french fishing boat who cut things way too close.

There must have been something about my voice.  She checked.  What she saw...what she saw.  Well she saw me trying to remove the black clutch knob from my pants.  The boat was still rocking in the receding wake and the wheel was still moving back and forth as the autopilot corrected our heading. For some reason I could not extricate the extra passenger from my fly.

Then came the demand for an explanation.

Environment Canada refers to the ensuing events as Hurricane Danielle.  It could have been named Hurricane Connie.

PS: I beat the little french flagged bastard at his own game.  I win.
Posted by Unknown at 7:04 AM