Eating Your Way Around Ft. Lauderdale

Yesterday by agreement with Okemah Rose (O kee mah) we sailed North out of Ft. Lauderdale to North Lake Worth for a hookup.  This is not about that.

Our first time in Ft Lauderdale, son Jake, the BC and I put in to Lake Sylvia for a two day layover in bad weather.  We did not explore much which was a shame but spent our time aboard a boat anchored in the midst of very expensive homes ("I would not want to put a price on such things but the number would have 6 digits and the first digit would be a 7") all aflame with waste light, each home having a "boat" moored before it.  The boats were all 6 digit multi tiered floating fibreglass castles.

Last year we tied up to a mooring ball at Las Olas Municipal Marina.  $30 a night.  A short dinghy ride away from everything.  Free wifi.  Good showers.  Municipal staff.  Four out of five is pretty good.

That year we visited with friends Ben and Andre who showed us how to enjoy Ft. Lauderdale, from their favourite creperie to the downtown, the best french bakery in Florida if not the entire USA, and visits to Miami South Beach.  We mentioned our visit to the "Mob Motel" an unidentified hotel near the beach where we were strolling.  A visit to the facilities became a necessity and we entered what appeared to be a nicely designed hotel.  Except for the 250 pound muscle bound doorman.  Well, it appeared to be a doorman.  There were two.

The lobby was unique and quite obviously not open to the public.  However the staff graciously directed us to the washrooms, cautioning us not to stray.  No worries there.  Ben and I both had the sonar on full active ping and were actively suppressing the  strong incoming fight or flight response rising in each of our gorges.  Being civilized cowards we elected flight.

This year we stayed at Los Olas again enjoying the company of Peter and Jane aboard Kinvara.  With these two livewires there is no letting moss grow on any body parts.  It was with a vengence that we toured the canals of Ft. Lauderdale.

We found a full blown shopping mall complete with Chapters reachable by dinghy.  Halfway through the first day we stopped at a city park, tied up and walked a short distance to the "French Bakery", another french bakery equal in every respect to the french bakery of Ben and Andre.  This one came with a jazz trio to enhance your patio dining.  Mind you coffee and a pastry cost $14.  But what a pastry.

That night we dined at Coconuts, as reported. 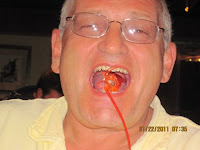 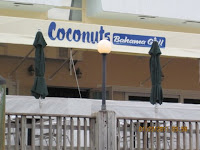 Next day we were away to the Raw Bar.  It is located at the end of a canal.  You get to it by entering Lake Sylvia, dinghying under a 3 foot high overpass (the southmost canal exiting Lake Sylvia), crossing the ICW and continuing to the end of the canal.  There it is.
. 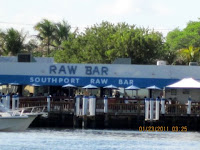 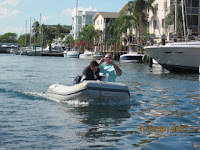 The Raw Bar has fantastic food, the BC had stuffed clams which she says were unreal, and prices are very reasonable.

Along the way you pass a covered dock designed for Mega Yachts.  You also pass mega yachts that cannot afford a covered dock.  Life is tough in Lauderdale.  Actually there are numerous for sale signs on mansions down here and many of the well maintained mansions from last year were not maintained at all: flaking paint, overgrown lawns, pools shut down or very strange shades of green and brown from algae.  The downturn has been hard on the upper middle class.  Poor babies.


Dinghying back we passed a catamaran from Canada which had followed us South from Lake Worth Inlet.  It being time for a gam we traded gossip from home and exchanged spots to each other for our travels in the Caribbean.  They marvelled that we had sailed the entire trip with our mainsail flying.  We marvelled that they had not.

Then it was home.  We showered one last time, traded some movies with Peter who had left his DVD collection at home and put up the dinghy and outboard.  Next morning we sailed back to Lake Worth Inlet to meet up with Okemah Rose.
Posted by Unknown at 10:08 AM