Closed Because the Pig is Late

Tragedy struck this sleepy oceanside town this week when the local carniceria was forced to close early due to a lack of pork.

A terse hand sign drawn in stark black hung in the door of the popular butcher shop and marisco outlet informing the pig eating public of the town's new meatless diet:

"Cerrado. El Cerdo es tarde."
[closed.  The pig is late]
In only a few hours the consequences of the tragedy began to make themselves known.  With the cerdo being late the butcher saw no purpose in being open.  No cerdo  meant no carniceria and that meant no pescado (fish) and worse, no mariscos (shrimp).

Around here people do not keep freezers full of meat.  Meat is something you buy today to eat today.

In our little community life as we knew it changed.  Having no cerdo was inconceivable.  We became the village of the damned, crowds of walking dead,  staggering about the streets zombie like seeking mindlessly to find and eat fresh flesh.  Flesh of Cerdo.  Cerdo.  Cerdo.
Spain runs on the pig you see.  Pork is king and there are no pretenders to the throne.    Fish and shrimp are much ballyhooed but more in the sense that we fete gold medalists at a handicapped olympics: we applaud the effort not the result.
There is no beef in this country worth calling beef.  There is not even cow good enough to grind up for ground beef.  Stores here stock something called "Burger Meat"" so housewives can make meatloaf and such without having to grind their own protein.  (Despite the astounding growth of McDonalds outlets and Burger King facades in the territory burgers have not made much of an impact in local kitchens.)
Steaks, when you can find them which is never, are 1/3 inch thick (for metronomes that would be on the order of 8 mm) so there is no such thing as rare.  The instant that piece of meet touches the grill it is flame broiled to a nice well done leather.  Such organization of gastronomic society is inconceivable to a Norte or Sudamericano.  Our entire existence is dependent on consumption of some part or other of a cow.
Local grocery stores devote as much shelf space to beef products as a Piggly Wiggly allows for goat.  That is to say virtually none.  Piggly Wiggly, a big American food chain, by the way knows nothing about pigglies.

The action centres on the jamon or ham.  Local ham is dry cured and made from distinctive black pigs found only around here.  You have simple Jamon Iberico, exquisite Iberico Pata Negro, unbelievably expensive de Bellota and then de Recebo, de Campo, de Cebo.  In the interests of racial harmony, Jamon Serrano, usually made from white pigs (which taste pretty darn good too I must say) is sold as a less expensive alternative.

Hams are sold whole, everything from the toe to the thigh, and every butcher shop has its walls lined with cured hams, hundreds of them, hanging from the hoof along one or two walls.   A ride on the local bus is guaranteed to introduce you to one or two senior citizens returning from their morning shopping with a hoof emerging from the top of their grocery carts. 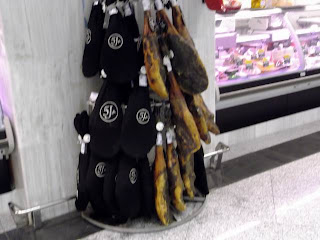 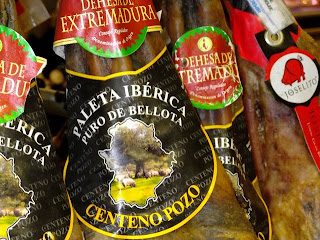 It is only disconcerting the first couple of times.

When you taste the ham you get it.