It is official.  We will never get out of Almermar alive.  Now in Day Five of sanding the toerail down to bare wood and prepping for new Cetol we have encountered a host of insurmountable problems.


That we began the process of renewal on poor overcharged Meredith is unusual in the extreme here in the centre of expat society.  Examine the two boats which are moorred beside us: 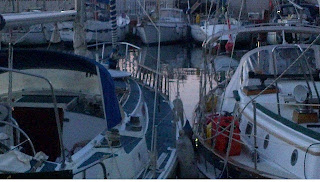 To starboard (your left if you look at the aerial photo above) is the British Westerly Casa, untouched by her owners in years if not decades.  Pay particular attention to the Dodger (or Sprayhood as they call it here).  Opaque is not an adequate descriptor.  Perhaps "deeply opaque". 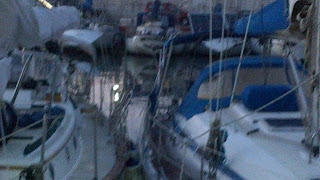 And then, on our port (to the right in the photo above and to the left) is German Bavaria Olli which proves that anything the British can do the Germans can do better.  Not only can you not see out of this dodger but the mast has fallen some time in the mists of time and punched a couple of holes.  Which explains the dark spot on the upper left bit of the window on the dodger.


In our efforts to For starters Sikkens Cetol Marine products are not sold in Europe any longer.  A host of excuses have been given, mostly aligned with the theme that Cetol is banned for environmental reasons.


Untrue of course.  From my research I discover that Cetol Marine coating is made in the USA and shipped to Europe in 55 gallon drums.  Once on this side of the Atlantic the barrels are decanted into smaller 750 ml cans for retail sale.  Guess what: Europeans do not like using American stuff.  So the Europeans just stop selling it and I am certain began the nasty rumours.


It is all just economic xenophobia.


On Meredith we love Cetol especially now that they have the new "light" version.  A couple coats of Cetol Marine Light and a couple more of Marine Gloss and you have a fantastic maintenance free coating to protect your wood.


Sikkens USA suggested we try to find some old stock in Europe to tide us over.  This we did at a bankrupt marine store (there are so many in Spain this year) liquidating old stock.  Euro labelling system describes the product as "wood varnish" and it took a few emails to Sikkens USA to sort out that we could use this product here and continue with Cetol when we get back home.


Sikkens customer service - IN NORTH AMERICA - is fantastic.  In Europe it is nonexistent.


Today was also the day we were to begin coating.  The wind is up however to 15 to 20 knots, the first day it is so in three weeks.  No coating gets done in 20 knot wind.


Accessing the internet is problematic on many fronts in Spain. Lousy wifi service is only the beginning.  Once you connected most browsers identify the country you are in from your IP address and then route you to local services and web pages - Google.ES for example.


These local pages are mostly in Spanish which is lovely if you are Spanish speaking.  Not on Meredith where linquistic progress ceased the moment I could order a Cervesa Grande y tapas.  Imagine my joy when I discovered it was not common to say "please" when you order in Spain.  That reduced my memory work by almost 20%.


Anyway Google has a built in translation service which is nothing short of a marvel of programming.  Change the settings on your Chrome browser and it will automatically transate everything on almost any webpage into English.


There are some humourous lapses however.  Today's Google Search doodle, the neat graphic that heads up the search engine every day, is in honour of Juan Gris, the Madrillano artist, a contemporary of Matisse and Modigliani who was a force in the development of the Cubists style of painting.


However, since I have Google set to translate when I put the cursor over the image it tells me the graphic is there in honour of the 125th anniversay of John Gray.


Now John Gray paints nice British pictures of pouffy dogs and dreary landscapes and he could never be confused for Juan Gris.


All of which is just good fun.  Google has advanced the abilities of all users of the internet in phenomenal ways and their translate service is just one more example.  Other translators are good but Google's is eminently usable and nearly invisible.
Posted by Unknown at 2:32 AM