Kalamata: The Cure For What Ails Us

Having been now in Greece for a week we can tell you we are not disappointed.  Certainly Greece is southern europe in all its eccentricity but it offers so much to compensate.  Sailing for one thing.  Marvellous predictable wind of more than adequate velocity.  And scenery for another with its mountains and Balkan cragginess.  And its, so far anyway, truly marvellous open friendly people.

We have not felt so enthused by any country we have visited yet and there is so much more to see.  Certainly our view of any country is influenced by our first encounter.  It was our good fortune to land at Kalamata, an out of the way and seemingly undistinguished town.  You should hurry to get there.  It is a treat.

Intending on clearing into Greece at Pilos on the east coast of the southern Peloponnese we fortuitiously screwed up the plan.  Exhausted from our crossing of the Ionian Sea we knew we would have to enter Pilos in the dark and late at night.

In good conditions we are loath to enter new harbours in the hours of dark.  On Meredith conditions were anything but good.  The BC and I were punchy from the exertions of the Ionian storm and as evening turned to night and then to late night we were getting punchier.  Methoni a port somewhat south of Pilos offered an easy approach and a protected anchorage.

As we came within five miles of the coast the BC laced on the Q flag informing Greek officials that we had not cleared customs and immigration and we made the entry to Methoni.  Lights in Methoni harbour turned out to be very confusing at least to our bruised consciousness and diminished capacity.  There we were: two retarded people in the cockpit staring "deer in the headlights" at the harbour completely occupied with trying to match the lights we saw with those on a chart.

We do not trust Chartplotters for close work at night and always use a list of lights and bearings to verify our position.  Our trouble was that we could not figure the bearings on the lights we could see.  After some sitting dead in the water to allow our brains to catch up we figured it out and entered Methoni dead slow.

Once in the harbour the amount of ambient light was adequate for manouevering and we found the anchorage, dropped hook at the end of a clump of boats, turned on the anchor light and went to sleep.

We woke to beauty we had not anticipated.  Methoni is a small settlement in a bay of islands, wonderful green foothills.  Gentle rounded hills which protected from the wind and graced the eyes.  It was a visual wonderland.

At 0700 the wind was already blowing 22 knots out of the North, the direction we would have to travel to make Pilos for clearing in.  Setting off it took us two minutes flat to decide that was a bad bet and divert to Kalamata.

Kalamata is an odd community, named after the wonderful dark flavourful olives grown in the area.  Odd that a town would be named after an olive and not the other way around.


It sits at the head of a bay in the Messinic area of Greece.  The bay is more of a fjiord, surrounded by mountains rising sheer and steep out of the water.  Sailors familiar with the North Channel of Canada will have an idea of the scene although not of the magnitude of the thing.

Entering the bay gingerly hugging the coast for protection from wind we discovered the first principle of Greek sailing: if you don't like the weather just blow your nose.  Conditions will change.  And change they did with wind shifts of 90 and 180 degrees in the blink of an eye, wind velocities running from 0 to 28 in the same brief span.

All under the careful watch of the surrounding mountains.

We did not hurry up the bay as it was all just too glorious.  And then we came on Kalamata.  Well, the marina anyway.

Kalamata marina is operated by a security guard.  He seems to be the only guy who works.  We called the marina ahead to alert them to our intentions and received a lengthy reply in Greek.  In the face of this we carried on.

Entry to the marina was straightforward.  There was a fuel dock and we headed straight for it.  It was closed.  Permanently.  The security guard, a gruff and seemingly rude man yelled at us from the dock and pointed to our slip.  "Fuel closed" he bellowed over the water.

We made for the indicated dockspace and tied up.  The security guard was reluctant to help the BC with the bow lines and the BC sensed that it was because she was a woman.  You don't do that to the BC and the guard ended up doing a serviceable job.

And so we learned the first thing about Greeks.  They love to present as gruff and unfriendly.  That is a cloak used to shield a friendly and fun loving personality -that so far we have found runs through every Greek we have met. The security guard made a few jokes, sold us the water connection and turned on our electric.  He then arranged for the diesel minitanker.

Formalities, customs and immigration, were a hoot.  We arrived about 1430.  Port police had gone home at 1400 so we were told to come back next day.  Had we been smugglers we had just been given the entire night to unload the contraband.  Sadly our lives are too dull to permit such excursions from conventionality and we spent the night at the local grocery provisioning for our foray to Myknonos, first stop for us in the Cyclade group of islands.

Next morning spot on 1000 we appeared at the Port Captain.  She was lovely.  She did the paperwork, chatted about Kalamata, offered advice on where to find various items in town.  At the Port Police we had to apply for a Permit.  The permit cost €20.  We don't know what it was for but it used to cost €10 so we did not complain.

Customs was a joy.  The customs officer was very entertaining and I suspect he used this to mask considerable ability.  At customs we had to buy a Travel Log for €40.  It used to cost €30 but since we got a break on the Port Police Permit we broke even.

Leaving the Customs building after about an hour and a half who did we find but the Port Police Captain waiting in her car.  She explained that she had to go to the tax office anyway and thought she would drive us back to the marina.

Man this is too much.  The Port Police Captain was a tremendous advertisement for travel to Greece.

later that day riding the bus downtown we got talking to the busdriver.  He was married to a woman who used to live just north of Toronto.  In the course of half an hour we learned about his wife, his family, the trouble he had with his son who died early.  He called his wife on the cell phone and insisted we speak with her.  It was an odd but pleasant conversation.  Her invitation to her home for dinner had to be refused as we were leaving the marina.

Ok.  So we love Kalamata.  We will be back.  The gulf it rules is picturesque, the sailing is fun and the anchorages beautiful and protected.  There are islands if you want some meandering;.  And it is home to the most inviting friendly people on planet earth.

Things to know about clearing in based on our experience:

1.  You start with Port Police, then customs which doubles for immigration, then marina to pay then Port Police.

One of the questionnaires filled in by Port Police asks for your Radio Station Licence.  You all know that you need a radio licence if you want to own a marine band radio outside of Canada, right?  That includes the USA and No there is no treaty between Canada and USA that says you do not need a radio licence.

2.  Before you leave a port you must have the Port Police sign and stamp your travel log.

3.  At every subsequent port with Port Police you must attend at the Port Police office and present your travel log on both entry and departure.  It will be stamped for both. 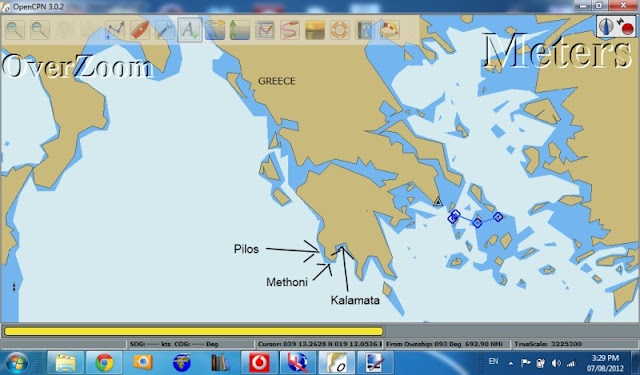