On the Run: Capo Rizzuto 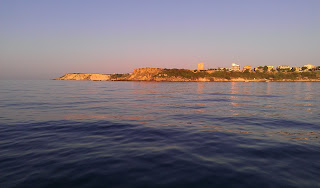 Off we were again, at 0630 this time, to make as much ground up as possible.  Again the weather gods favoured our passage and we had fair wind for better than six hours.  The wind died in early afternoon and then about 1500 turned to south.  South?  No south in anyone's forecast our hackles were up.  Unforecast wind was nothing ever but bad news, sometimes bad bad news.

As the afternoon wore to a close the wind picked up.  This too was counter intuitive as a land breeze should, if anything, ameliorate as the heat of the sun is lessened.  Things remained at Defcon Two on board.  Not high enough to take action but all parties were watching.

Finally by 1800 we had full on south west wind at twenty knots.  This was right on the nose and waves were being thrown up.  Our forward motion declined.  Things grew wet on board.

As we came up on Capo Rizzuto we decided to take refuge.  There was no way we would remain on the water bashing into the bloody fresh wind and water now hurtling towards us.  As we approached the Cape we found a small niche where we would fit and made for it.

Our niche was just deep enough that the waves, curving as they rounded the main point, were still about fifty metres off.  Water was calm where we set the hook and wind was cut by the cape to ten knots.  Sleep came easily.
No worries as we drifted off except that tomorrow we had to cross the Gulf of Squalls.  Who would not worry about a large open body of water named the Gulf of Squalls.
Not us that's who.  We slept.  Squalls were tomorrow's worries.
Posted by Unknown at 11:02 AM