Things You Don't See Back Home

Posted by Unknown at 3:32 AM No comments:

Letter to Maggie: Best Way to Tour Europe by Boat


Maggie:
Thanks for the review. Marina di Ragusa is the winter destination for sure.  The only thing better would be the Canary Islands.
Meredith leaves Tunisia on July 18 the date we are once again "legal" (by our passport stamps) to reenter the Schengen Zone.  Once out of Tunisia we will bounce off Malta and perhaps Lampiduza, see as much of Greece as we have to before turning around and getting out of here.
Egypt was a good bet earlier but with the latest constitutional showdown between Arab Brotherhood and the Courts a visit looks less likely by the day.
Ten days into our stay we loved Tunisia.  After twenty the love has subsided.  Unrelenting heat, absence of meat and entertainment and clothing have left us somewhat disaffected. Xenophobic uniculture is so damn boring.  I would not say the countries of the Med are racist exactly but they are a lot closer to racist than not racist.
I would kill for a decent pad thai but fear I must head for the next continent (east or west) to find such a thing.
Local people are very welcoming and we have spent several days in the homes and company of very generous gentle compassionate people.  We like the Tunisians we have met.  (not including taxi drivers and the grasping thieving merchants and customs guys)
Boats leaving Hammamet this morning (the three americans) were all hit up for baksheesh.  No pay no papers.  If unchecked this pernicious practice will destroy any attempts by the Tunisian government to build tourism or develop small business export markets.
In part we blame our disaffectation on our status as exiles from Europe.  As you know not that all the thievery is personal.
We have been watching the new Italian boat tax, originally imposed on all  boats but (when that caused boats to flee the jurisdiction)  "clarified" to assure boat owners that the new tax would only apply to boats in Italy owned by Italian residents.
Once the boats returned the law was further clarified to include boats regardless of flag or domicile of owner where the boat had an Italian captain.  This month there was yet further clarification to include any boat carrying Italian crew.
Next week we expect to hear the tax will be imposed if you serve spaghetti on your boat.
It is not just the tax but the burden of keeping tabs on it all.  Way too much paperwork.
From your descriptions it sounds as  if Sicily is a great place to visit for a while and from Marina di Ragusa we can always stage to Rome and Naples and Venice and Genoa.   All of which confirms the general view amongst North American boaters we have met that the best way to see Europe by boat is to leave the boat at home.
Thursday we hope to make Ej Jem for a concert in the coliseum by the Hungarian National symphony and 100 violins.  Then we head to Dougga and Bulla Regia for a final sight see.  On the weekend we join Tarek and Fatma (the lawyer and doctor who own the boat beside us)  for a family wedding and overnighter in Tunis.
And then we must stare down the customs dudes when they demand pay for papers.
But we will be away and that is what counts.
Bob and Connie
Posted by Unknown at 2:10 AM 1 comment:

Woke Up This Mornin'; Got Myself a Bun...Expat Living in Hot Places

In all of Hammamet Marina we have found three American boats and one other Canadian one.  A few Brits drift in and out but their stays are fleeting.  As a result we on Meredith find ourselves forming a good part of the extant expat club here.

So here we sit in the withering heat.  Every fan on every boat is full on twenty four hours a day.  Visiting another boat requires a minimum 15 minute wait after knocking on the hull: the occupants must get dressed before they can come out to chat.

Except when essential all of us are naked.  Pulling shorts and shirt  onto limbs friction filled from sweath and over arthritic joints that just do not move like they used to requrires time.   Usually the inside people just yell "Getting dressed"  and take as long as they need.

We all know what they were doing: nothing.  It is too hot for sex, cooking or board games.  Our brains are sufficiently swollen that even television taxes the logic systems.  Stupor reigns.

Leaving the boat can be excruciating.  Tunisia is a muslem nation and out of courtesy most boater women have been wearing longer skirts and long sleeves, men long pants.  Buses do not have airco.  Nor do taxis, retail stores or most hotels.  This week God has held his breath and the lack of breeze is debilitating.

To feed ourselves means relying on the local grocery, a poorly stocked den of germ laden thieves or, worse, taking the bus to one of the small villages between the marina and Hammamet town.  The ride on a normally crowded, hot, dusty bus at least provides breeze when the bus is moving.  Think of a sauna with a fan.  It is oddly cooling.

Whenever we must slow, eg for a police stop which happens twice on the five miles from Yassmine Hammamet where we have the boat and Hammamet Centre Ville, the sauna fan quits and the heat settles on riders like hot tar.  Thick enough to cut and hot enough to sear flesh the atmosphere does not support respiration. 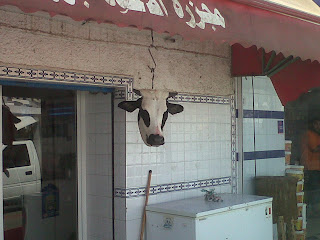 Half an hour of this and you are in town or at a little collection of open air shops selling your daily needs: bread, cheese, fruit, vegetables, chicken. Usually your choice is chicken or no meat however one day the butcher was selling beef.  We knew this because he hung the heat in front of his shop to alert his customers to the fact.  The cow was slaughtered that morning and was sold "Tunisian Style": you hang the side of beef and start cutting.  First person in gets one end.  Next person's meat is cut from where ever the butcher stopped cutting for the first customer.  So it goes until the carcass is disposed of.

No cuts of meat here.  Your choice is "two centimetres or three"?

On day two the heat is moved to a small cooler beside the door so customers know the carcass is no longer "fresh".  It is now cooled, which does not mean what you think.  The only thing cooled around here is the coca and that is luke warm at best.

Still we have learned.  At the village we normally attend for basic sustenance and hardware the greengrocers are several in number and line a street from the top of a hill to a traffic circle.  The stores at the top of the hill have the best produce and higher prices. You often see produce being unloaded at the very top store.

As you move down the hill towards the traffic circle the quality and price of the offerings declines with your altitude.  You would buy nothing "lower" than the middle of the hill.  Except for the very bottom, just at the traffic circle where the local farmers sometimes park their pickup trucks and sell to passersby whatever was not unloaded at the top of the hill.  There are some considerable bargains to be found here.  Also it is closer to the bus stop so carrying that 3 kilo cantaloupe (and that is just a medium one) back to the buse is much easier.

The village boulangerie is midhill and if you time your arrival there you get the bread so warm it is still warm two hours later.  Of course nothing cools in this unbelievable heat.  Usually every second hour on the hour.

By the time you have bused back to Yassmine and walked to the boat you have just spent an excruciating two to three hours just getting lunch fixings.

Having fed yourself, and except for your swim, you are now done for the day.

Time for the afternoon nap.