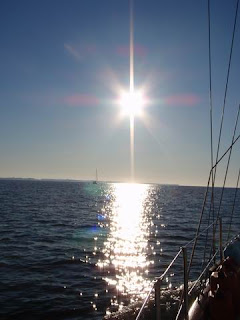 Douce Folie Gets its Usual Head Start
Leaving Elizabeth City at daybreak on October 31 Meredith braved the Albemarle, a required test of nerves before you can enter the Alligator River. The Albemarle is shallow, winds are always 10 knots more than forecast and waves build quickly. While not threatening to competent sailors in decent boats this body of water gives most of us concern for good reason.

Except not on October 31. Winds never reached 5 knots and the water was a flat as...Well, never mind, conditions were flat.

The Alligator River Marina is a perennial favourite of ours. Run by an aging "Miss Wanda" and tended by an aging black "ancient" this marina has fabulous grounds and facilities but never has any boats staying there. The fuel prices are the lowest in the state and here's the best part - they buy fresh shrimp from the local shrimpers and steam it for you while you wait. Fresh steamed shrimp for lunch seemed pretty good to us.

Not that day. The steamer was broken.

Quitting early we pulled off the channel at Marker 41 and anchored. Here was the scene when we arrived and an hour later: 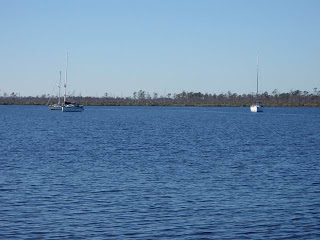 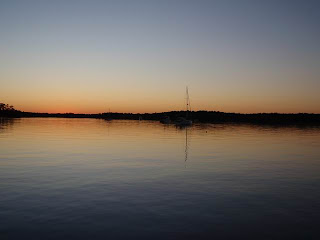 Up at dawn the next day we headed for the Alligator River - Pongo River Canal which perfoms a rather obvious task.

As always Douce Folie V got an early start: 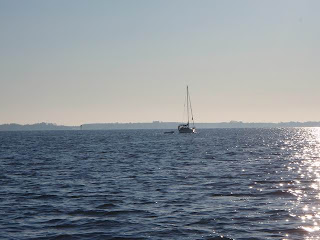 The canal is pretty benign except for numerous deadheads, poisonous snakes, mangrove spikes and of course Alligator River Alligators: 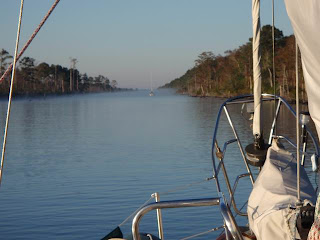 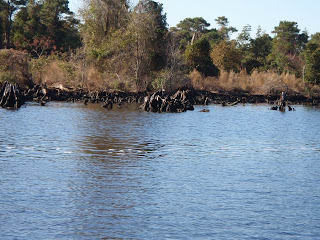 Here you See some of the nearly hidden spikes -
and LOOK AT THAT WAKE: it is the wake of a passing alligator. I know it for a fact.
My only protection was the Budget Committee. All I could use her for was an hors d'oeuvre, hoping the alligator would take time to savour the morsel while the main course escaped. But the Budget Committee is pretty skinny by now so I had virtually no protection at all.

It was pretty scary let me tell you.