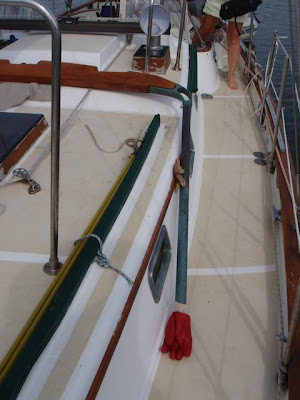 Note the cute little feet on the boom gallows
Integration, one of the two branches of The Calculus, is the mathematical equivalent of successively removing unnecessary elements from an equation.

OK. It isn't any such thing of course but I am not a mathematician and this description has allowed me to coexist on Earth with The Calculus.

Recently we performed a little Integration on Meredith.

We lost our boom gallows, a massive teak beam spanning the breadth of the boat and carried by two thick walled bronze tubes of 2 inch diameter.

One of the two inch bronze pipes which support the teak beam, the one on the port side snapped off at its base while we were sailing in light winds (10 kt) and seas (3 feet). It is a mystery how the stresses to which the pipe was subjected over its life decided that moment to reach their summative breaking point. 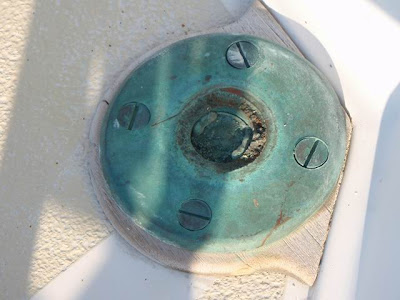 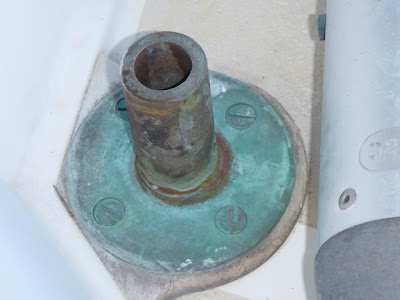 Lucky for us it worked out that way. Had it failed in difficult conditions with heavy winds and high seas a lot of damage could have been inflicted on our boat before we brought it under control.

Sometimes the gods smile with favour.

The gallows failed as I went to the mast to shake out a precautionary reef we had installed when we started sailing out of Onancock, VA. Conditions did not warrant the reef. As I passed the pipe I grabbed it as I usually do and it felt soft. My one track mind did not focus on that softness immediately.

As I left the mast there on deck stood Connie holding the boom gallows erect to prevent damage from a 150 lb object powering a bronze pipe around the deck.

The tools were got out and all bolts connecting the starboard side base to its stanchion base were removed. Connie and I, moving somewhat irregularly in the 3 foot seas, gingerly laid the heavy structure onto the deck. Further protection for the deck from the pipe ends was achieved when Connie stuck a pair of rubberized work gloves on the unprotected ends.

All pretty mundane stuff. The boom gallows was valued by us as one of the features that set our vessel apart from others. It is relatively rare. Never did the idea of removing it enter our minds.

Staring at the empty space formerly occupied by the boom gallows it dawned on the two of us that visibility was vastly improved. Shortly thereafter it also dawned on us that there was a lot less bumping and banging and hanging up of control lines without the massive teak obstruction.

We realized that our boat looked better and sailed better without our precious boom gallows. It now lies on the deck until we find a place to store it - the victim of Grade 12 University mathematics.

Integration is now being applied to other systems aboard our Meredith with one exception:

We agree that human systems are exempt.
Posted by Unknown at 2:39 PM