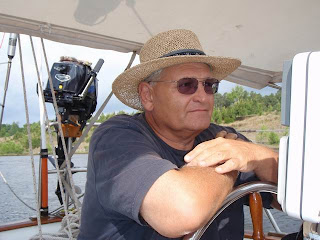 You know deep down,
I really really liked that diesel.
Skipper mulls over the prospect of losing his nemesis

So we called the mechanic in Beaufort today.

He is not positive yet but it seems the major oil leak from the diesel is the oil sender unit. This is a minor problem at worst.

Meredith's crew is effervescent. Yorrick may yet be pulled from the third ring of Dante's salvage yard.

Luckily for us Yorrick does not read Milton else it might well have chosen to Rule in Hell than Serve in Meredith.

(Note to Benoit: Unlike your practice with Nestor not everything is disclosed to our diesel)

Having only just named the beast we wonder if we were a bit hasty: Lazarus might have been the better moniker.
Posted by Unknown at 8:57 AM