Pining for the Fjords

Eight a.m. found us riding calmly at anchor in Rockhouse Creek, eating fresh baked bread and drinking hot coffee. Morning is mild but hazy. The best way to wake up on the water. None of the forecast wind out of the south has arrived yet. 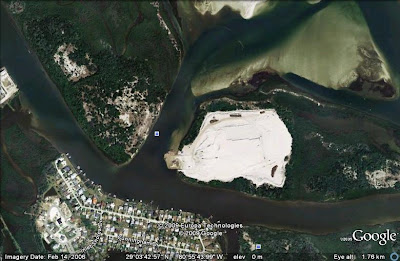 The Little White Dot is us on Rockhouse Creek

We departed 7:30 a.m. to get the best of the tide and to make miles before the weather turns ugly which it is forecast to do just after lunch. The fog which was very heavy at 7 a.m. had dissipated by 7:30 and we were off.

We made about a mile, but at least it was a nautical one.

Arriving at the Ponce de Leon Inlet we lost sight of both banks of the river in the reapplied fog. Ponce is a shoaly piece of saltwater and when we could no longer see the channel markers we quit moving, turned about and headed back to the anchorage.

Enroute we encountered Ciprano, one of the three boats which which we shared anchorage last night in Rockhouse. The skipper on hearing of the fog announced he would check it out for himself, always the approved procedure in my book. 4 minutes later we could see his steaming light pointed in our general direction. The steaming light was all we could see.

Ladyhawke (a terribly common name imposed on trawlers) another of the boats with which we anchored was just leaving the narrow entrance to Rockhouse as we returned. Receiving the same announcement from the Captain of Ladyhawke as Ciprano I remarked to the Budget Committee that it was nice to be sharing the waterway with competent sailors. Always check for yourself.

Ten minutes later all boats were once again safely at anchor in Rockhouse Creek enjoying breakfast.

In response to my last badly edited blog Heather Loveridge relayed that she and husband Peter had been unable to find a spot to anchor at St. Augustine last spring due to the unseemly spread of derelict boats. Her tale was the basis of a grand story and ended with their boat mired in the mud twice in an attempt to dock at a marina with too little water and the marina owner buying them dinner and lots of booze to compensate.

Peter's comment was that Florida has become very boater unfriendly and I am inclined to agree with him. The ICW in Florida is like a long stretch of Highway 401: tedious and dull but deadly if you lose your concentration. Sadly you cannot get to the Caribbean without going through Florida unless you are willing to undertake a days long offshore passage.

Increasingly sailors are taking the offshore route and abandoning what used to be pleasant sailing grounds.

So like Monty Python's famous parrot we are not dead yet - just pining for the fjords.
Posted by Unknown at 10:52 AM