Strung Out in Oswego, NY: a Passive Aggressive Approach to Sailing 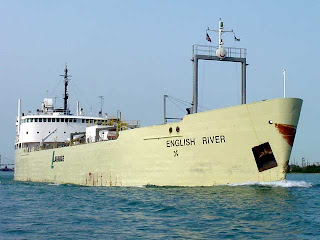 English River - Regular Visitor to Oswego
this is not just a nice picture as you will find further along in the article
June 20, 2010
Toronto, ON

A fast run up the Erie Canal saw us make the distance from Waterford to Oswego in 3 days.  Traveling loosely with Suncast we made nightfall stops at Amsterdam and Herkimer.

Bill on Suncast introduced us to IronOut, a much more environmentally friendly product to remove the brown mustache which identifies any boat sailed through the rivers of any state south of New Jersey.  Heretofore we had used a lovely toilet bowl cleaner whose active ingredient was 15% hydrochloric acid.  The fact it was only available for purchase in North Carolina sort of hinted at the fact the product was something to be hidden from the authorities.

With the mast on deck we performed an inspection and were glad we did: 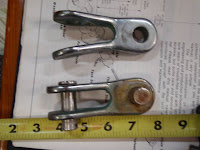 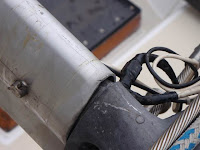 You inspect the rig hoping to find problem areas which you can correct before they endanger your rig.

As with so much of sailing it is a bittersweet process and there is no joy in actually finding defect.


The spreader was both deformed at the mast fitting and a small tear had begun.  The jaws on one of the stemhead toggles, shown in juxtaposition, had been badly deformed.  The storm outside Cape May had been fiercer than we thought.  We were busy enough at its passing not to have had time to look at instruments. 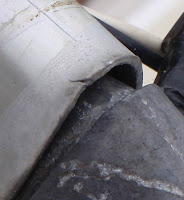 There was nothing for it but to repair or replace.  So much easier and less expensive with the mast already down.  A new spreader was ordered from Charleston Spars and a new stemhead fitting was ordered from Just Rigging in Boston.  These purchases knelled the end of $700.

For a few months we had been discussing whether we should replace the standing rigging on Meredith: the wires that hold the mast erect and immobile.  Existing rigging did not display signs of damage - no rust, no meathooks (broken wires that catch your flesh and slice you open), no cracks or discoloration or swelling in any swages.  However the wiring was original equipment - now 25 years old.  At some point you have to the consider the possibility that equipment will fail.  Our decision was to replace the rigging.

Our ten day pass for the Erie Canal, purchased for $37.50 allowed us to tie up at no additional cost at a beautiful park in Oswego, NY while we measured, ordered and waited for product delivery.  Every one of the 7 days allowed us under the pass was used.

Doing the work ourselves saved us a lot of money and produced better quality wire and fittings.  It does not come without cost of course: you must educate yourself thoroughly, equip yourself with proper tools, spend longer at the job and bear the cost of parts you break because of inexperience.

Then you must actually do the work.

By the end of the process we were totally exhausted.  The mast was stepped at Oswego Marina and Bernie did his usual expert and friendly job.  Bernie was very relieved when all the newly cut and installed rigging actually fit.  Apparently this was unusual although, except for the Budget Committee measuring and remeasuring each line about 12 times we never gave it a second thought.  It is nice having a process driven with a jeweller's precision.  Sometimes.

Rising early the morning after the stepping it remained for us to get the two booms installed, the sails bent on and the rigging tuned.  We could hardly move our muscles hurt so.

The forecast was for dead calm conditions and the lake was in fact dead calm.  That decided it.  We cast off lines, set course for Cobourg ON and went below.  For the entire day we stayed below too tired and sore to do much.  Every 15 minutes the timre would sound and in rotation one of us would turtle out the companionway to scan for traffic, freighters, fisherpersons and flotsam.

Our sailing friends are horrified that we would cross Lake Ontario without someone on constant cockpit watch.  I will address this foolishness in my next post.
Posted by Unknown at 6:46 AM