For those of you who have written to ask why any sane person would even consider a direct Vero Beach to Beaufort NC sail I offer the following: 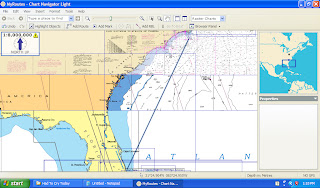 For it to have any meaning you must only accept that I am sane.  And consider that much of the trip could make use of the northbound current of the Gulf Stream.  And know that we had a four day forecast of light winds all out of the south.


How could we miss?


Here's how:
At that point the forecast changed we were cruising niftily along at 9 knots in a strand of Gulf Stream some fifty miles or so south of Charleston and about 120 miles east of that same target.  That was of no consequence.
Brief discussion with the Budget Committee disclosed that what we really wanted to do was head west out of the beneficial Gulf Stream and run to Charleston screaming like a little girl.
If only it were that easy.
As we turned west our forward speed began to fall off.  The more we turned the slower we moved at least in a forward direction, which was, of course, the direction in which we wanted to travel.
Long before we were pointed on our desired course we found ourselves stopped dead in our tracks.  Well, in a Westerly direction.  Although pointed west we were traveling both north and east at measurably significant rates.  Sideways sailing.  Sideways sailing.  Cool.
Another strategy was required. Easy peasy.  We turned due north and, as the Gulf Stream made its way east we slipped unnoticed out of its grip.  Twenty five miles north of where we wanted but still, we were free.
Better part of a day later we were approaching Charleston in deep fog.  Thank goodness we planned responsibly.  The fog was sufficiently thick that at 9 a.m. we could not see ocean freighters passing within  200 yards.  No matter how hard we tried.
In this case the responsible and easy decision was to anchor off the channel.  We chose to do so behind the seawall protecting the entrance channel figuring we could shelter not only from the commercial traffic  but also from the growing waves.  It was our view and that of NOAA that the fog would burn off by  noon.  Hope died at 2 p.m.
Resurrection was found shortly after this.  A dead ship, a massive ocean going beast, was being tugged into Charleston by three tugs.  Anchor was hauled and we established ourselves just outside the channel beside a big red buoy.  When the dead ship came by we pounced.
Jumping into the channel behind the disabled ship and its attendant tugs we ran the diesel at max rpms to keep the dark shadow created by the hulking vessel in view.  Actually most of our journey was completed with me on the helm steering by chart plotter (bad idea) and tugboat wake (good idea) while the Budget Committee could barely make out the heavily shrouded image of the dead giant.
Forty five minutes of this and we were inside the entrance.   Entering Charleston Harbour was like walking out of a curtain.  The fog died in a near straight line and we emerged into bursting daylight and warmth.
A nice change from the cold damp of the deep fog.


Two days later we were in Mile Hammock Bay.  You know how that turned out.
Responsible decision making did nothing but get us in trouble that week.  Solutions seemed to require a bit more daring approach.