Arabian Nights - A Stay in Fes

We woke to find ourselves in an environment more foreign that we could ever have imagined.  Not that the waking was in way unpleasant.  So much the contrary.  Our hotel, the Dar Ahl Tadla, booked online was a gem, located only a ten minute walk through the Bab Boujloud or "Pearl Gate" and deep into the Medina, Fes' unique and UN heritage site and urban area.
Our night before had been total chaos, we arriving at the Gare Fez, via first class train from Oujda some 350 km to the North East.  Cleverly I had accepted the hotel manager's offer to arrange taxi to meet us at the train.  It was pretty classy let me tell you to walk into the train station to find our driver waiting with hand drawn sign calling us to him.  The manager joined the driver and together the six of us, driver, manager, BC, me and two friends travelling with us, climbed into the small Mercedes taxi and found our way to the Bab Boujloud.
Debarking the taxi we then had a ten or fifteen minute walk through the gates, into the medina and to our hotel.
Thank god we had the manager with us.  To get to the hotel we had to step lively through the endless winding streets of the medina filled with wall to wall shops and street vendors haranguing each and every passerby to examine their wares "best price mister, not bad quality like the tannery goods".
After ten minutes progress we were at the turn to the street that held our hotel.  You found the alley by brushing aside the carpet hanging down over the alleyway put there by the carpet shop on the corner.  If the hotel manager had not been there to guide us  we would never have found the hidden secret entrance. 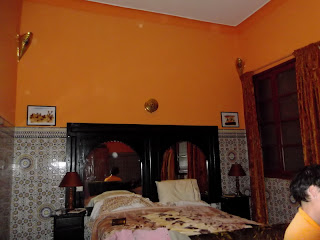 Our rooms were fabulous, decorated in ceramic tiles and moorish leather.  Each room, in what was a converted home of the formely wealthy had louvers that opened to a central courtyard in which was located the dining room.
Breakfast was included with the room and consisted of Moroccan specialty mint tea, a heavily sweetened very hot beverage, three kinds of bread, a hard boiled egg, great preserves and a tiny bit of cream cheese.


Connie had done a lot of research on Fez and warned that the nstreets in the medina were winding and treacherous.  "You will get lost" she warned me and our friends as we walked the narrow alley to our hotel.


That first night after stowing our bags we just had to take a walk about our new neighbourhood.  We ordered dinner for 2100 and went for an hour's stroll. 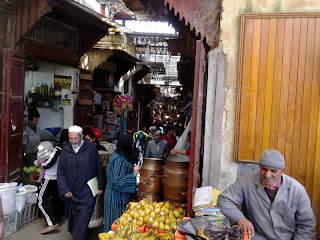 Our friends considered themselves excellent navigators and led the way.  At one point we said to them that we were going to return to the hotel..The sun was going down and I was at the limit of my ability to remember the labyrinth of streets we had traversed to arrive where we then were.  Walking the medina that night was like playing the old Simon game where you had to memorize an increasingly complex pattern of lights and sound.


Our friends continued on their way.


An hour and a half later they were just getting back to the hotel.  Visibly shaken they had had a real adventure getting totally lost as dark fell and then being accosted by some of the night creatures, some more human than others that feed only after dark.  Finally they had paid a kid a lot of money to guide them home and midway they decided they did not trust their guide.  All in all they had been badly frightened.


Dinner was a somber affair although the food was excellent and the prices low.  Next day everyone's mood was leavened and we attacked the medina in earnest.


There are no words and most of the pix are video.


A couple more pictures will have to do.  We have amazing videos of the medina, a maze of 9,000 streets and 80,000 shops.  No street is more than 2 metres wide and no corner is square.  Shops are supplied by donkey and they have the right of way.
You are guaranteed to get lost and we did.  Gloriously.