Pelicans in the Air, Crackling Bugs in the Bilge, Movies of One Day. A Jumble from Hampton.

A full day of this on Friday:

View from the Taffrail of Meredith, Friday October 22, 2008

which we shared with fellow sailors, Tony and Linda Sellick, from BAYFIELD:

Today, changing oil and filters in Meredith, I was surprised to hear my bilge crackling.

Beyond all doubt we are in southern waters.

The crackling is the sound made by ugly little warm water critters which latch on to the hull and eat the slime. In all respects a good thing (warm water and less slime).

Connie is now anticipating having her toilet sparkle. This is the final and surest sign we have attained Eden. In warmer climes there are little water creatures which emit a phosphorescent glow when stressed. As your boat moves through the water you leave a lighted path behind. When you flush the toilet the water sparkles. Really cool in predawn manoeuvers.

This is all the result of hard slogging on Friday bringing Meredith from Deltaville to Hampton, VA where we joined the crew of Tessa, a boat met first in Chesapeake City, for drinks and dinner: 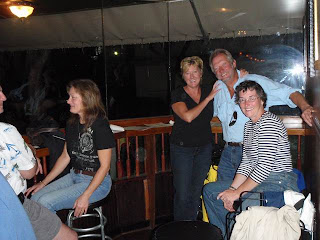 Connie with Gary and Laurie of Tessa. To the left is Missy and the left profile of Jim a pair of racers out of Put in Bay or Catawba Harbour in Ohio who are sharing the sail down the waterway.

We started at Marker 20 but sure enough ended the evening at Taphouse. Best microbrewery selection I have seen. We even got to try the newly restored original Pabst Blue Ribbon, which is a very good summer beer.


So.. other than calm waters, temperate climate and cheap dockage what does Hampton VA offer:

1. It is the site of the battle between the Monitor and the Merrimack two armoured ships in the US Civil War. This makes it either the scene of a dramatic advance in modern warfare or the next rung down on mankind's steady descent to armageddon. Either way notable.

2. In that civil war when it became apparent to the residents of Hampton that the Yankees were about to take their city these brave folk burned their own town to the ground to prevent any advantage falling to their hated enemy. Pretty good stuff these people. You want them on your side.

3. Scene this week of the start of the annual Caribbean 1500 race from Hampton VA to Tortola,BVI.

It is also the home of the Cousteau Exhibit, a permanent memorial to that very publicity aware French aquatic guy. Here is the building: 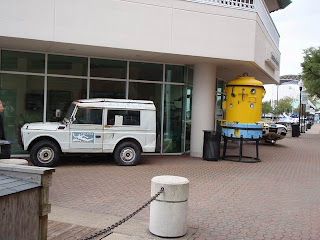 Apparently the Fiat ATV was rammed by an amorous male Rhinoceros to the great consternation of all aboard.

Some people actually care about stuff like this. I am not one of them.

Never watched his TV show either.

This exhibit is right beside our dock.
Posted by Unknown at 11:20 AM