Update after a Week in Annapolis 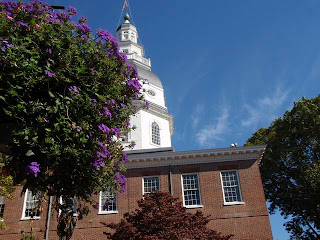 So, it has been a week since we last posted. Not that we have been languishing.

Here is one decent photograph of the state legislature buildings.

After the sail boat show we stayed in town for two reasons:


Our good friends Randy and Donna were coming into Annapolis for the power boat show, AND we did not have a transmission so we could not escap 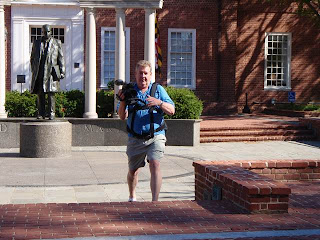 
Here you see Randy checking the size of his brainpan against that of Thurgood Marshall, one of the outstanding and radical justices of the US Supreme Court. (Also black and the lawyer who won the Brown v Board of Education case which tore down the school segregation laws).

I will deal with the transmission matter in a separate blog to come later. The dust must settle a bit before that story can be told properly.

With Randy and Donna here the pace of things picked up. I spent a full day being given VIP cruises aboard luxury trawlers - a Kadey Krogen 42, Selene 55 and a Nordhavn 47 while Randy shot video for his series.

This was fun for several reasons. Because Randy climbed aboard in full Sherpa mode with his backpack and camera where I simply stepped onto the rear platform every company rep figured I was management and Randy was the drudge.

The execs (including the President of Selene) all plied me with questions as to the direction the show was taking, what shots did we want, what did I think would help present their product in the best light. Being a great executive myself I told them. Nothing was held back while boats spun in the harbour and thrusters, bow and stern, generated tidal waves of Newtonian reaction.

The enjoyment might have been enhanced also by the fact that the cheapest boat of the bunch went out the door at $1.25 million. That's US dollars.

After a morning of this Randy and I were totally exhausted and we retired to Pussers bar for some well deserved painkillers. As soon as Connie heard this she joined us. 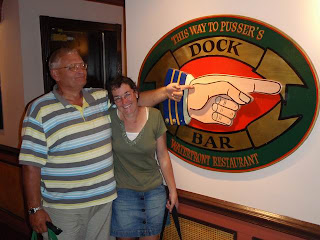 You will notice who has been demoted to sherpa now that the budget committee is on the scene.

The evening ended in Randy and Donna's hotel with a swim, pizza and two great bottles of wine selected by wine steward Randy.

Thanks guys. We needed the swim and the hot tub and the showers. You have no idea.

Next post - getting the gears on the transmission.
Posted by Unknown at 7:07 AM