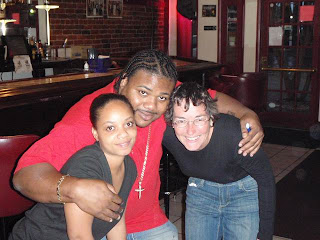 All it takes is one good night.

Our last night in Hampton, rain pouring down, temperatures low enough to create slush. Connie wants to go out for dinner.

Strolling down the street of bars and restaurants in Hampton that seems to substitute for our kitchen while we are in Hampton VA we passed by our usual haunts looking for something "else". Coming upon a small nondescript storefront Connie, always interested in a new experience, looked in and was waylaid by the two people shown here.

Meet Roger Winston and Lolita posing with my Budget Committee. Roger is head chef and owner of the Soul Food Cafe in Hampton. He is larger than life with an ego and talent to match. Lolita is the head waitress and Roger's skill in the kitchen is paralleled or even excelled by Lolita's on the floor.

The menu was what us northerners call "soul food" but which is, according to Mickey Hutchings (on whom more later), really just southern cooking. It was good, not in the way that Dave Thomas would admire a sliver of Tete de Veau, but deep down Thanksgiving dinner cannot eat another bite good.

Connie had catfish with yams and beans. I chose the 3 course extravaganza with salad (I substituted hot wings), bbq'd porkchops with yams and collard greens finishing with peach cobbler. Twenty bucks!!!

The greens were picked and cleaned that morning by Roger's father from his own garden. It was like Thanksgiving dinner. The catfish, the bbq, the yams, my god - the yams were out of this world, were all unbelievable.

No matter who you are, if you are near Hampton go to the Soul Food Cafe. Eat.

Bobby Flay will never come here 'cause he doesn't stand a chance.

Now, as for Mickey Hutchins, well, he is the reason we went to the Soul Food Cafe. Not that he recommended it but we met Mickey and wife, Lillian Jason the afternoon of the Soulfood experience. 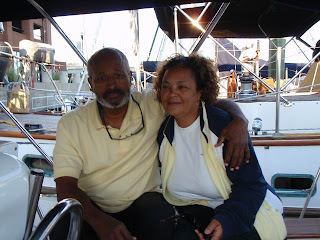 On a lame excuse we spent a couple of hours in the cockpit of their Island Packet "Carpe Diem". There we learned that two weeks earlier, while sleeping in their V Berth, Mickey and Lillian experienced a direct lightning strike. This destroyed much of the mast hardware and all of their electronics, which formed the excuse of our meeting.

This interesting pair are setting out on their first trip south. A lightning strike might stop mere mortals dead in their tracks. Not Mickehy and Lillian.

An afternoon listening to Mickey is the intellectual equivalent of watching a cat stretching in a warm ray of window sun. All that sinue and speed of light reflex disguised as this stretchy warm kitten. He fooled no one. Like most sailing husbands when Lillian spoke Mickey listened. Or did he buy that TV because he thought it was a good idea?

Mickey and Lillian gave us a two hour lesson in southern food and the origins of jazz in Philly. Lillian is a music afficionado with a personal collection numbering in the hundreds if not thousands of cds. And they are all legal.

Presented with the Soul Food Cafe that very evening evening was too much for the two of us.