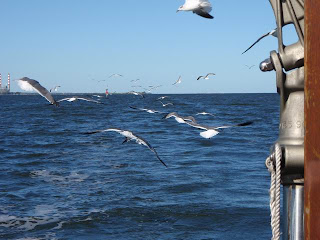 Just Who is Showing Whom Their Butt?
Shot from the Stern of Meredith

Today I will tell you about breakfast in Vero Beach.

To get to shopping and restaurants in Vero Beach we must dinghy to the dinghy dock in ample time to make the hourly bus. Commonly we like to take the first leg of the bus which gives us a tour through the oceanside shops at Vero before returning to the marina to pick up sailors heading downtown.

This particular morning we caught the first bus of the day, 7:45 a.m. Bob wanted breakfast.

Climbing on the bus we saw it was half full. Unusual as the bus was normally empty. A number of middle aged hispanic and black women were laughing and talking in the middle of the bus. It gave the bus a pleasant ambiance.

As the bus headed down the main road towards the ultra expensive beachside condos it became apparent that the riders of the bus were working class women: nannies and maids heading to their jobs looking after the homes and children of the rich Asian and white families who could affoard the million dollar views their condos provided.

The bus stopped a block shy of where it turned off the main road and entered the exclusive strip of shops, restaurants and condos on the beach row. The women stood as a group to disembark.

It dawned on me this bus stop was located to ensure that no one on the shopping street had to take any notice of the warn clothing and tired demeanor of the people who keep their world working. Sort of a Friz Lang, Metropolis, surreal kind of a moment.

As the women left the bus they joked and laughed with the bus driver. Each woman placed a dollar bill in a little tip cup the bus driver kept for the purpose. They were all good friends.

Although we had ridden the bus many times we had never noticed the tip cup. It was a little embarrasing.

We rode the bus to Toojays, a favourite deli/breakfast place. This restaurant is a bit tony but we could afford breakfast there. The parking lot was always full of Lincolns, Cadillacs and Mercedes, the patrons silver haired, manicured and well dressed. Except for us, of course.

Connie left to get a newspaper and returned with 2 locals to read over breakfast. Suddenly Connie erupted from her chair and with no warning other than a stricken look on her face, ran out of the restaurant.

Fearing food poisoning or diarrhea I followed along to the washrooms at a more relaxed pace to see if I can assist.

Connie was outside the restaurant searching for something; when putting the coins in the paper box she had set her wallet down, forgetting to take it up again when she retrieved the paper from the box.

The wallet was never found. No one turned it in to the restaurant; no one called to tell us they found it; no one took it to the police.

Living in a world of unbelievable plenty the aging rich of Vero Beach had to steal the pathetic $40 in my wife's wallet. It was not enough money to fill the tank of their Lincoln.

It occured to me that the mantra of the ruling class of American people is "I got my mine, screw you".

An old Fats Waller album, recorded live in some white club about the same time Fritz Lang was making Metropolis, has a moment where Fats softens his playing and tells his exclusively white audience: "I wonder what the poor people are doin'. Wish I was doin' it with them."

At the time I thought it was just a crude sexual reference. Again I find myself embarrased.

A day late and a dollar short we always tip the busdriver.
Posted by Unknown at 6:02 AM