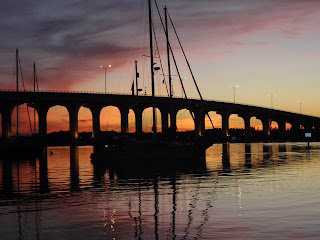 There are things we like about sundown at Vero Beach: the sunset and Happy Hour.

Last night we visited Radical Jack to view an Engel freezer which Peter and Heather Loveridge which interests us. These two are semi retired and have brought their fascinating vessel down from Yarmouth. Oh, yes, and they also wrote the Cruising Guide to Nova Scotia. "The one with the red cover" Heather explains, published by International Marine. 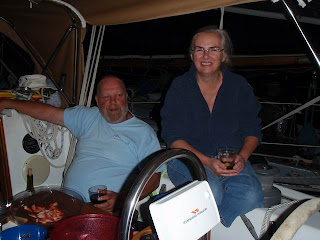 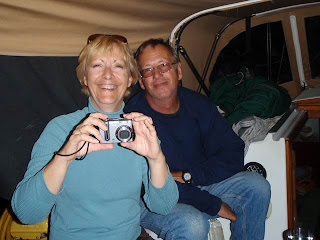 Peter and Heather are on the left.

We ended up on Grace C owned by Dick and Ruth Foster out of Port Stanley ON shown on the right. These two are heading to the Abacos on their first trip. Dick was head of pottery at Hutton House back in London. These two are way cool except,as noted, they are not big fans of Miles Davis. This does not constitute grounds for refusal to drink with them however.
Posted by Unknown at 2:30 PM