What Do Fools Do in Elizabeth City? 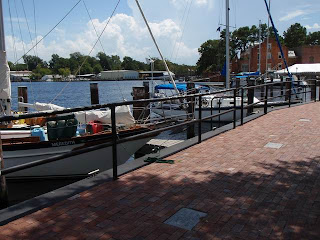 Meredith and Impulse docked at Elizabeth City, NC
Boarding Meredith at Bock Marine in Beaufort we headed North at speed to get out of the Hadean heat.

In 3 days of travel we have passed 2 boats.

We have been advised that only fools travel the waterway here during August. We depart again tomorrow.

The new diesel is performing admirably. With only 25 hours of operation we cannot assess the engine yet but it is certainly quieter and more powerful.

We find ourselves in Elizabeth City NC where we are moored waiting the passage of Hurricane Bill. As I write Bill is located just at our latitude but is a couple of hundred miles offshore. The Coast Guard is advising all vessels less than 150 feet in length to head for shelter.

When Bill has passed and the offshore seas have settled we will head for Norfolk VA. Then it is offshore for a 3 day sail to Nantucket or that general area. Departure from EC is set for tomorrow.

Elizabeth City NC is a fabulous stop. This town is famous on the ICW for its free town docks and welcoming wine and cheese parties hosted by the mayor.

Parties are easy to come by on the water. Last night Connie suggested we walk downtown for an ice cream. Climbing off Meredith we ran into Don and Joanne from Impulse who thought ice cream sounded tempting. Crossing the parking lot we struck up a conversation with a couple of locals, Wade and Rose, who were going to the same place we were. The crew ended up in a wine bar with atrocious music and great conversation that continued for 3 hours.

Don and Joanne our neighbours aboard Impulse an Endeavour 32 lost their mast two months ago. A bridge that had opened for 3 waiting boats closed after only 1 boat had passed under. Tragically for him Don was the second boat and he nailed the closing span.

The impact broke his brand new mast in half at the lower spreader and the force of impact drove his stern under water flooding the cockpit and cabin.

Fortunately the boat held and the upper mast portion did not hole the boat or either Don or Joanne. Seven weeks later Impulse has another new mast.

No one from the bridge or the State of Maryland that operated the bridge has ever contacted Don or Joanne to see if anyone was hurt. Needless to say a lawsuit has been commenced.
Posted by Unknown at 12:02 PM