Getting into Hemingway Marina - Updated Directions 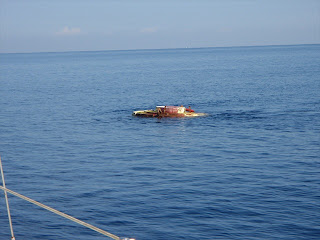 Could You Spot This Critical Marker in a Seaway?
Nigel Calder's book on Cuba is an excellent guide to cruising this most interesting country. That it is not reliable is is one of the stupid lies told by people who know everything but have never actually been to Cuba on a boat.

The book does need some updating however and the directions for Hemingway Marina need some attention.

The directions seem simple enough: go to the sea buoy and turn to a course of 140 degrees to the entrance markers.  The entranceway is very narrow and both sides are shoal and full of sharp rocks offering near instant grief if you stray.
Sometime between 1998 when Calder's book was published and 2010 when Meredith sailed into Hemingway the sea buoy marking the beginning of the channel into Hemingway underwent a change of profile.  Basically the entire steel superstructure which would normally adorn a proper sea buoy has collapsed leaving only a round float sitting at water level.

You have seen the sea buoy in the picture above.  This picture was taken on a perfectly still day.  Imagine trying to find the buoy with 3 or 5 foot breaking waves.

Making the whole thing worse is that the channel markers are little better than plastic pipes and are difficult to see under many conditions.

So if you are going to Hemingway set the location of the sea buoy in one or two gps's.  Run your boat to within 50 yards and then start looking.  The buoy seems to be filled with cement and you do not want to run into it.  A bow watch might be a darn good idea.

When Meredith entered Hemingway we were in 3 foot breakers and we did not see the buoy.  We thought it had been removed.  Imagine our surprise when we sailed right past her.