IQ Test: Why Do They Call It Stumpy Point? 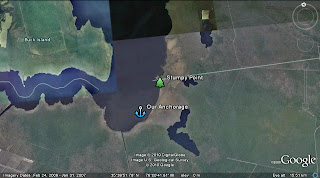 So, Here is Where We Set the Hook.
You Can See the Remains of the Pongo  Alligator Canal just at the Left of the River
May 6, 2010
Deep Creek Lock, Dismal Swamp, VA

The trip from Port Canaveral to Beaufort, NC was a nonevent.  Except for the beautiful Dorado we caught, and ate, on the way.

Leaving Canaveral at about 1 p.m. we made Beaufort by 11 a.m. two days later.  Entry to the ICW was clean and we made our way to Broad Creek on the Neuse River where we dropped hook for the night.  We decided to go inside at Beaufort NC because the weather around Hatteras was threatening.  Hatteras is a nasty piece of water and waves regularly are reported in the 50 to 70 foot range not too far offshore.

Day two in the ICW the winds were howling.  In the ICW we were protected much of the time but when exposed we found the wind, forecast to be 10 - 15 kts were in fact 22 - 25.  Funnelling I suppose as the wind found itself compressed onto the river.  In trying conditions we made our way up the Pongo River and through the Pongo Alligator canal.  It was a long passage and we were tired by the end.

In the Alligator River (into which you are dumped if you take the Pongo - Alligator Canal from the Pongo River end) there are few good anchorages and even fewer within our reach before dark.  We chose our old reliable Green 39 anchorage in the Alligator River.  That day we decided not to anchor in the bight at G39 but that we would run past and into the more Easterly bight which was enormous and offered good protection from the wind and wind driven waves.

Skipper Bob warned in his book about the high incidence of logs fowling anchors in Alligator River anchorages.

Never having had a problem we just anchored with no trip line.  We shoulda listened to Skipperbob.

Rising next morning we found ourselves firmly affixed to the bottom.  Meredith would not budge.

We took in all the anchor rode but the 15 feet from our bow to the bottom.  It did not matter.  Our anchor was set like it was in concrete.

Nothing worked to extricate ourselves.  We motored ahead.  We went nowhere.\

We bounced and jumped on the bow.  Nothing.

Of course if we had used a trip line, like the guide books suggested, we could have tried to pull the trip line to free the anchor.  I do not think this would have worked myself but it would have been nice to have this arrow in the quiver.

After 30 minutes of trying everything we were resigned to hacking off the anchor and abandoning it.  The water was filthy brown and visibility was about 2 mm at most.  There was not much point in diving on it.

As a final ploy we turned Meredith in a series of slow circles.  We ground the anchor out of the stump.  It took something like another 30 minutes.  There seems to be no damage to the shank of the anchor.

Anchor weighed we started up the waterway, headed for Elizabeth City.  We got out our charts.  There, not 100 metres from our chosen anchorage was a point.  The name of the point?