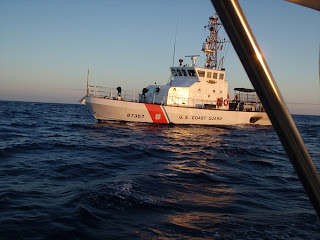 Too Bad |I Did Not Get a Shot of This Baby Bearing Down
On Meredith at Flank Speed
May 6, 2010\\
Deep Creek Lock, Dismal Swamp, NC

We were 8 hours out of Havana making for West Palm Beach, estimated to take 2 full days.  The Budget Committee had control while I napped on the cockpit bench.

The strident if controlled voice of the BC "Benner WAKE UP" roused me nearly instantly to a state of controlled stupor.  There was no room for misunderstanding the tone. A dog would have been on full alert, a cat hiding until the problem dissipated.

As motor control returned to my brain the radio crackled "Sailboat with Canadian flag at ..... This is the Coast Guard Cutter @#$#$.  Do you copy?"

Able after a few seconds to turn my head I looked over the starboard beam and saw what had caused the BC to erupt.  A BIG WHITE SHIP flying straight at us.  The bow wave was riding up the entire topsides of the big naval vessel and flying with great spray.

It was impressive.  It was a bit scary.

Fortunately my pilot training had ingrained in me the "airline pilot's voice", that controlled deep slow way of talking that allows a pilot to inform air traffic control his 747 has just lost a wing and will crash instantly into the only remaining orphanage in North America while sounding like he is ordering a steak at a fancy restaurant.

The voice is the first thing taught in flight school and until you master it you are not allowed to fly.

We responded immediately asking if the radio call wass to the "Canadian registered vessel enroute in International water to West Palm Beach, Florida".  Somehow I remembered my friend Matt Fischer back in London told me to say something vaguely like this.  Matt spent several years in the Canadian diplomatic corps in the USA.

The cutter arrived in mere seconds taking a position just off our port stern.  The BC leapt to her prescious fishing pole to reel in the line and lure before the cutter, well, cut it off.  Seeing this the Captain of the Cutter moved his vessel well aft and took up a position on the other quarter of Meredith.

Our dialogue began.  The exchange was civil, questions about port of departure, intended destination, full names of all crew, passport numbers.  The usual questions by now.  Our interceptors were very polite.  When the computer vetted our identities the Captain thanked us for our cooperation and wished us a good evening.

Before he left I complimented him on the condition of his cutter.  He told us proudly how hard his crew worked on keeping their boat in top condition and I told him it showed.  He posed his cutter for the shot that leads this article.  (Living in Lucan as we did for 30 years we always noted the pride with which the volunteer fire department maintained the town fire engine.  It was washed weekly even if it never left the station, which in Lucan was most weeks.  These guys, firemen, coast guard, whatever, all love their rigs and take great pride in them.  The cutter was well cared for.)

This was a whole different matter than being boarded by 4 armed thugs from Customs and Border Protection let me tell you.
Posted by Unknown at 6:21 PM