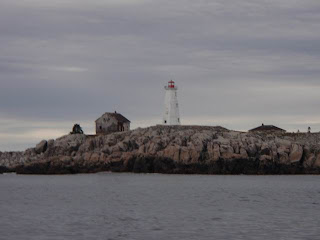 South Western Shore Treats Await the Sailor in Nova Scotia
Our plan in Halifax had been to make our way to Shelburne and then hightail it across the Bay of Fundy and Gulf of Maine.   The first step, to Shelburne was complete albeit a day behind schedule, that is on our second day of travel we were one day behind.

We had wanted to visit Yarmouth and friends, Peter and Heather Loveridge, but this couple had been warning us for weeks that we needed to get out of Nova Scotia as fast as possible.  We would get together another time.

Peter is the author of the Cruising Guide to Nova Scotia - the one with his name on it - which he has just finished updating.  As we made our way along the Eastern Shore of Nova Scotia Peter emailed me copies of the galleys of his new work along with suggestions for anchorages, commentary on weather developments and other helpful bits.

First thing you do when sailing anywhere in Nova Scotia in September is check the weather.  You then discount it 50% and add a 50% adverse direction/conditions factor.  Even then you will usually find yourself having been too optimistic.

Awake in Shelburne at 8:00 a.m. ADT  we tuned the forecast.  It called for South winds and lots of them.  We immediately cancelled plans to cross the Bay.  The Bay of Fundy which enjoys a massive tide running in a roughly north south direction (north west is flood, south east is ebb).  When a fast tidal current meets strong south east winds you get big waves.  The Bay is also open to the South East and wind kicks up big waves even in a flood tide.

Now the second thing sailors do in Nova Scotia is check the tide.  To make an efficient sail from Shelburne to Yarmouth you want to leave Shelburne about 4 hours before low tide at Cape Sable.  This way you get some ebb tide assisting you southward out of Shelburne, neutral tide while you round Cape Sable and flood tide to carry you north to Yarmouth.

As we finished paying for our mooring ball we realized we were just in time for a perfect run to Yarmouth.

And a perfect run it was.  Fabulous Nova Scotia scenery - vaguely reminiscent of parts of Manitoulin Island right until dark.  We chose the inside route around Sable which kept us close to the point and required close attention to navigation but which saved us a lot of time compared to going way outside to avoid the rocky places.  This is a good weather strategy.  The Coast Guard keeps a lifeboat on permanent duty at Clarke Harbour on the south tip of Cape Sable Island for those who misjudge.

By sunset we had made it around Cape SableAs Ra, the sun god, retired from the horizon, he was replaced with whimsical Seth, god of mischief and storms.  The curtain of darkness brought with it rain and then fog and then heavy fog.

The navigation aids in Nova Scotia are phenomenal.  There are a lot of lights but they are logically placed and the timing chosen for the flashing pattern is very common sense.  The lights directed us to Yarmouth unerringly.

As we closed on Yarmouth we found ourselves making 7 kn then 8 then 9 and finally 9.8 knots.  We had only 12 knots apparent off the stern (those south winds, remember) so the tide strategy was paying handsome dividends.

By the time we got to Yarmouth Bay the fog had thickened to the point we could not follow the red markers into Yarmouth Harbour.  While passing one red buoy we could not find the next in the mist.  Thank goodness for a reliable chartplotter to help keep our course in the channel.

Also as we entered the long arm off the ocean leading into Yarmout the wind began to climb.  That and we turned 90 degrees to the wind so the 12 knots apparent wind became 18 knots and 20 knots. By the time we made the harbour the wind was blowing 25 knots, we could not see 100 feet in the lighted harbour and we were glad to be where we were.

We were so happy to have arrived the Budget Committee muttered not one word of protest as she hauled up and connected the bridle from the municipal mooring ball we picked up - with her bare hands: 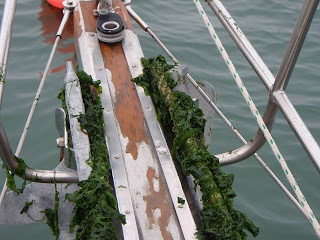 Crossing the Bay of Fundy/Gulf of Maine - Some Planning Ideas

There are three alternatives to making your way from Nova Scotia to New England.

Many people elect the short option and sail from Yarmouth to North East Harbour or Bar Harbour ME.  This is a short crossing, say 100 nm depending on your destination, but leaves a lot of coastline to traverse southward. It is inefficient but minimizes the time your boat is exposed to the elements.

Experienced sailors, those who have no desire to see any part of New England, will choose a destination on Long Island, Block Island or even further south which allows them to sail outside the massive shoals found at Nantucket and Martha's Vineyard.   Depending on where they land they will travel 350 nm or more to a destination.

We elected a middle distance route: Yarmouth to Cape Cod Bay.  This took us some 200 nm southwest out of Yarmouth.  It reduced the distance we would have to travel but allowed us to sail Cape Cod, traverse the Cape Cod Canal and run along the New England Coast for a good bit before meeting up with   Cape Cod sticks out from mainland New England like a Scorpion tale.  People travelling south from Bar Harbour or Bangor ME have to either go well offshore to avoid this Cape and the Nantucket/Martha's Vineyard shoals that lie south of it or make their way inside, through Cape Cod Bay, to Cape Cod Canal and easy passage south to safe water.

The trip itself is the subject of the next post.
Posted by Unknown at 11:42 AM