The Other Side of New York - Sailing the East River 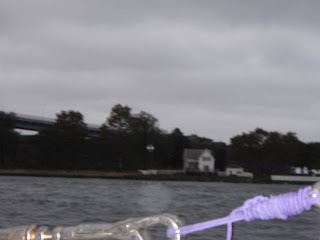 The crew of Meredith is unabashed in its enthusiasm for New York especially as enjoyed from the cockpit of our favouritie sailboat.   It is usual for us to travel the island of Manhattan along its western shore, the Hudson River.  Our transit of the shoreline and the cityscape that entails always includes a stop for a week or two at the 79th St. boat basin for a few days on a $20 a day mooring ball and a chance to land and explore the City on foot.

This year we approached New York from a different perspective: the East River.  It was even more intriguing than the Hudson.

Manhattan is separated from the mainland bits of New York City by three rivers.  The Hudson river extends along the entire West  shore of the island.  On the North and East Manhatten, which is vaguely triangular in shape, finds itself bordered by the Harlem river which runs from the Northern extremity of the island at the Hudson River to Hell's Gate.  At Hell's Gate the Harlem meets the East River which carries the job of separating land from island on a Southwest journey which brings it back to the Hudson river at Battery on the Southern extremity of Manhattan (and Coney Island which will be well remembered  by afficionados of old movies).

The East River is a treat.  Along its banks you encounter the Triboro bridge, Throg's Neck, Hell Gate, La Guardia airport, Riker's Island, the United Nations building, the Eliason waterfalls, the Brooklyn bridge and Coney Island.  Once deposited back into the Hudson you are right on the Statue of Liberty and Ellis Island. 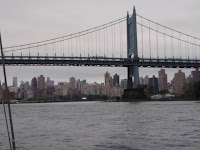 The Skyline from Throg's Neck,
Rikers, the UN & the Brooklyn Bridge 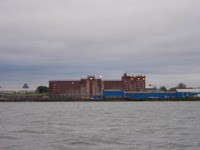 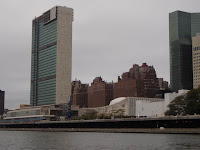 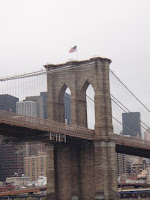 After all that cornucopia of New York tourist traps you pass below the Verrazano bridge and are deposited into the grey green waters of the Atlantic Ocean.

What Are The Issues?

This is New York, right?  No such thing as a free lunch in this town.


Not only is the tidal current for the East River very powerful, running as high as 5 knots but at Hell Gate, where you enter or leave the East River, the East river runs square into the Harlem river.  The result is currents that can exceed 7 knots.  Let me repeat what Reed's said about Hell Gate before that august publication fell before the economic onslaught of the chartplotter.

The currents carry around a sharp bend in the river, causing fierce boils and swirls, making maneuvering  difficult especially in a low powered vessel.

A couple of years ago the Budget Committee and I transited the confluence of the East and Harlem rivers in a high powered vessel and it was quite a carnaval ride.  With 425 horses driving a little Limestone runabout the trip was concerning at times.

To avoid the tidal issues there is a simple strategy that worked aces for us.  We arranged to be at Throg's Neck just before slack water before ebb tide at Hell Gate.  As the tidal influence asserted itself over the river we were carried effortlessly along all the best sights and shoreline.  In fact the ebb tide provided a boost all the way out the harbour, under the Verrazano and into the Atlantic.  What a ride.  So remember this: slack water before ebb.  Get into Hell Gate at this time and have a great ride.

Do this trip.  It is fantastic.
Posted by Unknown at 6:45 AM