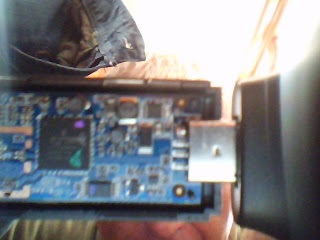 Before the next instalment we offer our apologies to readers for the interruption in posts.  We blame it on dieting.

In the crossing of the Bay of Fundy our poor Meredith was tossed about as if her 25,000 lb. ballast were an irrelevance.   That was an impressive weight loss program to be sure.  Treating the crew like chicken in a shake and bake bag did wonders for their calorie consumption as well.

24 hours into our crossing of the Bay of Funday everything in the boat was on the floor, only half of it because we put it there to prevent it from being broken. The other half found its own way.  Some of that stuff did not make it, like our wireless USB network dongle.  This cheap device allows us to reach somewhat more distant wireless networks than did the built in units in our laptops.  Helpful when you are on a mooring ball and not in the marina office.  Like we are right now.

The usb plug on the dongle was bent at an unappealing 90 degrees to the norm, its plastic case was smashed and when plugged in to the laptop (hope springs eternal) the poor thing just sat there looking dead.

Since we are on a mooring ball in our 4th day of 35 knot winds, give or take, I have had some time to play with useless projects.  Even hopeless projects.  Like the USB dongle.  I mean we were not going ashore for internet.

Armed only with a soldering iron and the immovable but thoroughly unjustified belief I could not make things worse I went to work on the corpse of the dongle.

I don't often solder printed circuit boards.  They are finicky things, small and coated in protective coating, with printed leads that look substantial but are really thinner than the cheap chinese aluminum foil the Budget Committee buys at the Dollarama.  And the wind keeps gusting to 45 knots and the  boat moves.

But through no process known to me it seems to have worked.  I am online.  Sort of.  Just so long as the Budget Committee holds the dongle in her left hand while aligning herself in an East West axis while applying 47 newton metres of force in a lateral direction to the dongle plug.

So it may take a while.  The Budget Committee keeps wanting to go to the bathroom and she gets all fidgety and throws the alignment out of whack.