While electricity is included in our marina fee until a couple of days ago we were unable to use the hookup.

In Europe everyone uses 220 volt 50 cycle power.  In North America we use 120 volt 60 cycle.  The differences are huge.  There are inexpensive ways to safely use European power sources on your 110 volt North American boat.

Three solutions are available to the North American sailor presented in declining order of cost.  We use the last solution on Meredith to great effect: 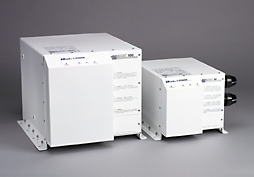 1. Before you leave North American install an isolation transformer like the unit shown here.  These will cost you $1,000 to $2,500 plus installation.  If you choose this route hire an electrician.  With 220 volts the electricity has twice the force; It will kill you twice as fast and you will be twice as dead. 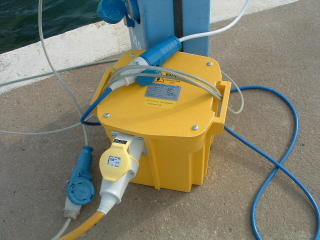 2. Spend less money and buy a "contractor's" isolation transformer like this one. This transformer is used in the UK by contractors on jobsites.  UK law requires that jobsites have only 110 volt power to reduce risk of death and injury and there is a good supply of these transformers about.

Cost is in the $350 to $400 range (MAYS sells one for $400 here in Horta).  The thing weighs just under 100 pounds and to use it you must modify your shore power cord by cutting off the old North American three prong male plug and installing a European 16 amp three prong male plug.  Not a complicated alteration.  Moving and storing the 85 pound transformer might be.

3.  Buy a European 12 volt battery charger and use your battery bank to power the 110 volt AC inverter which almost every North American boat has by now.   The charger powers the batteries and the batteries the inverter.  Total cost for high quality charger, extension cord and adapter so the extension cord could plug into the marina 220 volt supply was about 100 euros.

An off the shelf automotive battery charger is unlikely to be three stage but who cares.  Our solar panels use a controller which brings the batteries up to a good AGM voltage every day so we do not need the robust three stage charging our now generator driven built ibattery charger uses.

This solution cost us 115 euros for charger, extension cord and marina plug adapter but only because we chose a very rugged battery charge (76 euros).


Power to the People.
Posted by Unknown at 5:39 AM