This morning I had to boot up the netbook to find out what day it was.  No one on the dock (who spoke English) knew for sure.

After inquiring into the accurate day I fear the rest of day was wasted: rebuilding the windvane, watching Branco on Waterhobo go up the mast to repair his sail track, sharing what was left of our rental car day with boaters who needed lifts.

About 1000 things got interesting.  Waterhobo was having showdown at the O-Mlette Coral and we enjoyed the fruits of war along with the crew of Ti Gitu.  Winner of the omelette war was Ann of Waterhobo but her battlemate Branco did not lose face as he had taken over as chef at the local restaurant a couple of nights ago when the owner burned his arm badly enough to lose the night's business. Branco cooked for the entire restuarant including our party of eleven than night.

Here you see Branco hard at work cooking over a wood fire the dinner of chicken and ribs that we all enjoyed only minutes later.  The Budget Committee watches over his shoulder and Paul and Mo from Ti Gitu offer hints which Branco ignores:


Brunch settled, the Budget Committee did the daily shopping at the Ola bar where she replenished our supply of Portuguese Buns and a Loaf.

On her return we got out  the drill and drilled a bunch of holes in our refrigerator so we could fill the surrounding space with expanding urethane foam.

We found our fridge had far less insulation than even we had feared and whole cans of foam were injected into the forward fridge bulkhead in mere seconds.  Then it expanded.  And expanded. and....

When finished it had filled two other bulkheads in the fridge and we had blooms of urethane foam sprouting like mushrooms from orifices we did not even know our fridge had.  I am not allowed to show you those pictures.

While the BC cleaned up the mess I jerry jugged fresh water to fill the midship tank.

Then the BC decided to join Maggie and Ann on the wall where they were recording their vessel's Kilroy in glorious living colour.  Three women, hot sun and in no time at all the Vinho Verde was out of the fridge and the women were having a very good time.


But look what they accomplished: 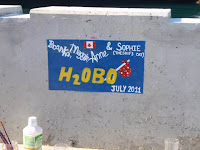 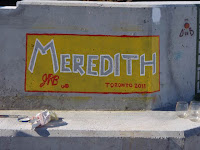 Tonight there is a festival in Lajes and we heard a rumour of free food.  Need more be written.
Posted by Unknown at 10:49 AM