A week until we fly home.  We put into Vero early to get at some boatwork and to this have we devoted some not inconsiderable time.   On the mainteance issue we try to invest at least 10% of the value of the boat every year in renewing, upgrading and refurbishing.  The last few years have tended to be 20 to 25% years.  When you live on your boat failure to keep up puts you at risk.  Not that failure to have a new flatscreen TV ever imperilled anyone's life but the failure of rigging, diesel, sails, batteries, pumps and other stuff we seem to be incessantly replacing and upgrading could.


As a measure of how busy we have been and how bored we have grown I present the list since August: 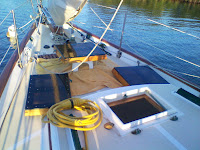 The Budget Committee has committed herself to removing the old finish and redoing the brightwork.  Here you see her start on the 3 hatch covers.

While she was doing this I busied myself installing our new rigid boomvang from Garhauer.  Well, actually my good friend Peter did most of the drilling and tapping.  He was a cabinet maker and teacher in real life and made a series of "how to videos" for Stanley Tool.   He was growing very upset at my misuse of both tools and the english language and stepped in, just in time. 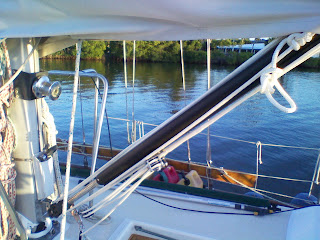 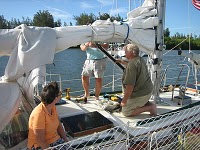 Left: Peter (behind the boom) installs the boomvang while I watch.
Right: The Boomvang installed 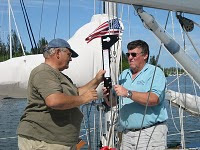 Peter's largess needed repaying and the occasion arose when it developed his rigging was badly detuned thanks to some truly unconscious work by yardmen when he launched his boat.

Out came my beloved Loos guage and we had at it.

Two solar panels which have lain in our basement untouched by ray of sun for 5 years were invigorated and seet to work. 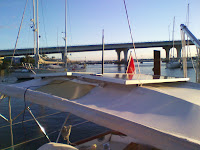 This we did in Halifax but the pooping in Long Island Sound caused some salt water to find its way to the solar controller where the ocean did what it loves to do - set the copper traces in the controller afire.  Corrosion everywhere, the small piles of green dust copper's best effort at a flame.  The traces were eaten clean through and a new controller  needed to be installed. 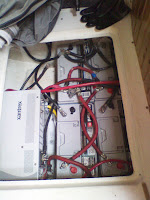 Two new battery banks were installed and everything rewired- 4 Sears Diehard PM2s, AGM technology, and an Optima redtop for starting.

Although I hate to mention it we also installed the new Xantrex SW2000, pure sine wave inverter charger, one device of which I wish I had never heard.  That product is a total disaster and should be recalled.  I discussing its many shortcomings with Xantrex about its many shortcomings. 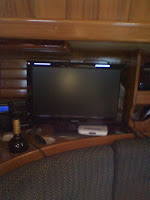 And finally a 19 inch LED LCD Flatscreen TV.  The small white box at the bottom allows me to play all my .avi files  on the TV so I continue to make good use of the bittorrent material downloaded before we left Canada.
Posted by Unknown at 11:18 AM