Liberte, Fraternite & Etouffe - It is All in the Attitude

At the request of a friend I have started typing in a byline on the posts. Surprisingly it helps me keep track of what day it is - Today is November the 8th. It is a Sunday. I know this because I pulled up the calendar on my computer. It is a good thing to keep current. 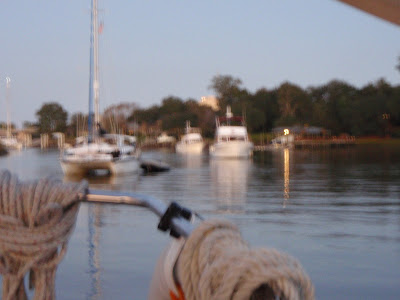 We are anchored outside of Charleston, VA in a very tiny waterway called Wapoos Creek. We prefer it to the choppy windblown open anchorage selected by most cruisers which is located just outside the Charleston City Marina

City Fathers, or maybe just the bureaucrats who run things marine in the City of Charleston, have decided to discourage cruisers from visiting or staying in their city. A field of low cost mooring balls was cleverly eliminated a few years ago after a storm required all the moorings be removed and "tested" for integrity. It turned out integrity was indeed at issue and the moorings have never reappeared. This was followed by the City removing the bus stop which was located right outside the marina office. It is only two blocks away now but try to get someone at the marina to tell you where it is. Finally we called yesterday to see if we could buy a shower - pay $5 to use the washrooms. The girl on the phone, who had the usual put upon voice of any entrenched government worker, explained that they used to do that but the sailors abused it so they stopped. Having spent my life working with the ever extending tentacles of government I did not pursue the matter. As if she gave a damn if she even made sense.

The advantages of our anchorage is that it is protected and usually deserted. It is also only a 1/2 mile walk to the local Piggly Wiggly staffed with the friendliest people in the world. This is not a one off experience as we have enjoyed shopping there for 5 years now.

The disadvantage is that it is about a 2 mile dinghy ride to the closest landing point allowing us to see the city of Charleston. Even this is not a drawback however and forms the basis for today's blog:

On the longish ride to the City marina we musta pass through the anchorage. No cruiser can dinghy through an anchorage without checking out all the boats looking for old friends and likely boats to approach in the search for new contacts.

Luck rode the dinghy with us yesterday and we came up on Attitude, out of Montreal known to us from a couple of good days spent together in the Dismal. Attitude is crewed by Allen, Natalie and Allen's ten something son from his first marriage, Felix. Felix is trying very hard to learn English although his English is better than my French.

Allen used to operate the largest Petro Pass in Quebec, 5th largest in Canada. He sold out when he realized the stress was killing him faster than he wanted to die. With the proceeds of sale he bought a house in the south of France and a nice place just north of Montreal. Then he was looking to buy a spot in the Islands. A nice little triangle anchored by real estate at all three vertices.

But he saw a show on the television about a guy who sold it all, bought a sailboat and took off. Allen was intrigued. He taped and watched the show several times and finally asked Natalie to watch it with him. Natalie is a live wire. Before the show was over she was making plans for the trip.

Allen bought his sailboat and the two of them started taking sailing lessons. Neither of them had ever been on a sailboat before. Did I mention Natalie is a live wire?

Five weeks later the boat was provisioned and the three intrepid adventurers set off.

Allen had a quotation inscribed on the Companionway of Attitude: "Freedom (the Liberte part) is the ability to make hard choices".

During our afternoon together Natalie described their night before which they spent with a group of shrimpers. The fishers had taught them how to cast for shrimp and then, totally captivated by their new friends, provided 10 gallons of fresh, just caught shrimp. They made a gift to Felix of a casting net.

As we left Attitude to tend to business ashore Allen presented us with a huge ziploc bag full of shrimp. "Caught this matin" he explained. "The freezer it is too much".

On the half hour return to Meredith we observed that most of our friends on the water were French Canadian. Reflection on that day's afternoon left no doubt as to why. These people are alive.

By the time we were back aboard Meredith the sun was low in the sky. Sundowners were poured and while we had a leisurely sit in the cockpit Connie and I cleaned and peeled the shrimp. 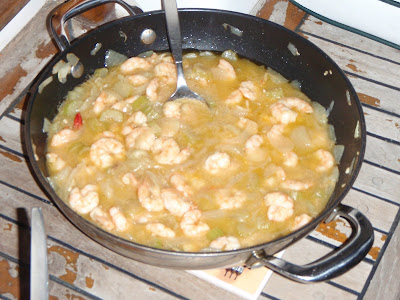 ouffe. Etouffe is an interesting dish best described as Shrimp in Butter gravy. Connie starts with 1/4 lb. of butter and works her way up.

Forty five minutes later we found ourselves in the cockpit once again only this time we were enjoying food that rivaled anything Paul Prudhomme has ever conjured up. And the shrimp were not 12 hours old.

A great quote on my favourite subject, an afternoon with friends and the best dinner we have shared in several weeks.

Once again we went to bed sated. The secret is in the Attitude.

Merci Attitude, Mes Amis.
Posted by Unknown at 6:14 AM