One Day in the Life of Ivan Denisovich

THE RAIN BANGED reveille on the forward hatch above Meredith at five o'clock as always...

The low pressure area formerly known as Tropical Depression Ida did not leave cleanly. In its wake has been 2 1/2 days of solid overcast skies with "90% POP". Naturally this is the forecast that NOAA gets right.

Rain continued in hard patches through our first night, through much of yesterday afternoon and all of last night. We had a nice break during the early day yesterday.

A nice day meant boat work. Laundry was taken ashore and tended to while we enjoyed breakfast at the Huddle House restaurant and then shopping at the Grayco Hardware.

Back at the boat the Budget Committee tore apart the forward berth and went to work eliminating 100 days of accumulated dust from cushions and duvet. Meanwhile I tore down the windlass, gave its myriad parts a good fresh water bath, cleaned about 5 lbs of accumulated grease and dirt from the creases and crevasses, regreased and reassembled everything.

Only the renewed rainfall saved me from tackling the main halyard winch and the cockpit winches which are due for the same maintenance teardown. Connie looks forward to polishing the stainless and removing the brown spots which just refuse to stop growing on our pulpit and pushpit.

On our first night at anchor in Factory Creek we watched in a downpour as the rain overwhelmed the battery driven bilge pump on the derelict hull moored behind Meredith. Maybe the battery just died. Anyway night before last the derelict sunk to the gunwales. 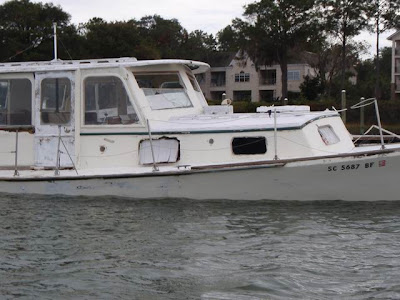 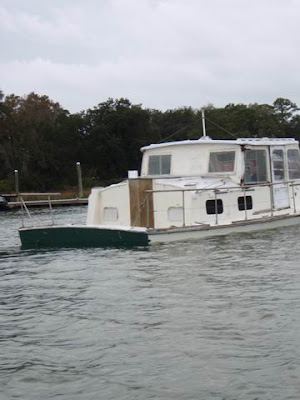 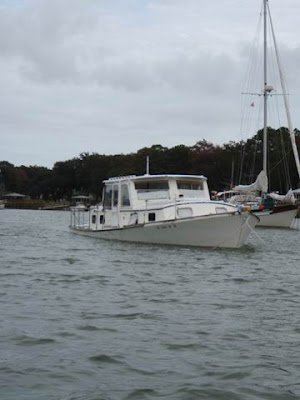 As I finished rebuilding the windlass the owner of this newest member of the submarine fleet arrived. He was dressed for work wearing white shrimp boots, a torn old lumberjack shirt, a pony tail and a beard that reached halfway down his chest.

He went to work in his aluminum boat trying to push his sunken vessel out of the channel and into a neighbouring slough. Here it would be supported during the next low tide (tides here are 8 feet +/-). In this way he explained, the hull would beach and drain on the falling tide and he could plug the leaks. Forward progress of the hulk was slow, almost nonexistent. This seemed consistent with the prior history of this hull.

When I finished with the windlass I offered my 10hp dinghy to supplement the 15 attached to his aluminum skiff. The poor man was having a great deal of difficulty getting his hull to move. I assumed this was because it was resting on the bottom but, no, in fact the man had anchored his boat at the bow and had not loosened the rode before attempting to motor ahead. His anchor held. The boat went nowhere.

Once the rode was loosened the two of us deftly tugged the flotsom into the empty slough. As we worked the man talked.

"There is no loss here" he explained. "I was given this boat and it was sunk then. I know boats and this boat will be a fine vessel again one day". He then launched into a lengthy lecture on his family history.

Between bursts of power to respective outboards as we worked the errant hull into its mud drydock I was treated to a full history of the south bank of Factory Creek. This land had, in more prosperous times, been owned by the family of the man I was working with. His grandfather owned the land that now housed the marina and his father ran a fish processing plant and railway on the land beside that.

Finally the boat was satisfactorily positioned. The rain started up again in earnest and I made my apologies and headed home.

When I left the owner, a witty ponytailed long bearded fellow of 60 years or so, was sitting in the pilot house of his vessel in the pouring rain waiting for lower tide so he could "plug the sink." He explained: "It's under water right now and I can't get the water to stop coming in".

Arriving back at Meredith Connie and I went below to wait out the rain. My new acquaintance, a witty ponytailed long bearded fellow of 60 years or so, was sitting alone in the pilot house of his vessel in the pouring rain waiting for lower tide. He had to "plug the sink." he explained. "It's under water right now and I can't get the water to stop coming in".


We did not re emerge until this morning. This is what we saw: 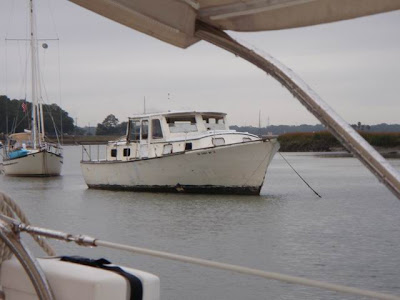 Victory
Bobbing spiffily in the water behind us, back on its mooring ball, was the hulk. None the worse for its experience. I am going to suggest its owner name it "Destry".

This guy's family fortune had suffered but not its spirit. If rugged individualism and sheer stick to itiveness means anything in this world that old guy will recover the hull and restore it and his family honour to full lustre.

If only there were enough years left for me to see the day.
Posted by Unknown at 5:47 AM