Anchoring in Wapoos Creek, just south of Charleston SC, was deliberate for more than just the protected solitude and proximity to Piggly Wiggly. The anchorage is also below the Wapoos bridge which separates Charleston from the ICW south. Wapoos bridge is closed from 6:30 a.m to 9:00 a.m. daily. Traffic is closed for any vessel more than a few meters tall.

Beaufort is a one day 75 statute mile run from Charleston - but only if you can start at daylight. All conditions being in our favour yesterday this is exactly what we did. If you are interested in what the right conditions are I have some commentary at the end.

We were away at 6:30 a.m. and our departure was clean. Meredith owned the water - we were alone to commune with nature and the occasional crab fisher. Soon enough the first traffic from the 9 a.m. opening of the Wapoos bridge was on our tail. Only the powerboats of course.

The first boat to pass us was a monstrous 40 + Nordic Tug. Normally a compact little trawler type boat this vessel had been transformed into a monster. Its portholes had dainty little window coverings, two adirondack chairs were situate on the aft deck. Bicycles, generator, canvas coverings on everything. This boat had everything except a little patch of turf on the upper deck with lawnmower standing by so the captain could participate in the Suburban Saturday morning ritual.

And what did the owners of this ponderously overstuffed plastic pachyderm name their tub? Why the name was "Footloose". "Footloose". From what had these people cut themselves loose? We were surprised they were not dragging a 4 wheel drive jeep behind them in a little barge.

The name was somewhat aristocratic if you catch my drift - almost debonaire.

Footloose merely led the circus parade of plastic pachyderms. Over the course of six hours we must have been passed by fifty trawlers, sportfishers and picnic boats. All boats that could and should have been on open water but who, like Meredith, found good reason not to.

About 4:30 p.m. as we approached Beaufort rain started. We anchored in Factory Creek in a torrential downpour, stripped off our wet clothes and sat and watched while the derelict boat behind us sank slowly into the mud.

It seemed entertaining to us.

Tomorrow we get long hot showers.


What were the Right Conditions?


When I say all conditions were in our favour I meant this:

1. We had a fair tide to pass through the Elliot's Cut. This cut joins two rivers and if the tide is ebbing the current in the cut is ferocious. As it was we transited the cut 1/2 hour before ebb tide was done and the current was still 2.5 knots against us. 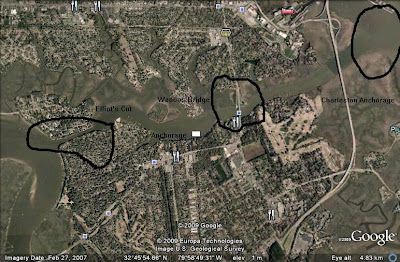 2. We would be travelling on the top half of the tide through all the potential low water spots on the ICW.

Much concern is expressed by sailors new to the ICW about depth of water. In Georgia and South Carolina most of the tidal swing is 7 to 8 feet. Even a boat with 7 foot draft can find water to travel the ICW so long as it limits itself to the top half of the tide. At half tide there is the charted depth plus 4 feet of tide under your keel. At full flood tide there is charted depth plus 8 feet of tidal water under the keel. How much water do you need?

If you make sure you travel on half tide rising you will find on the ICW in any North American production boat.

Why Take the ICW Instead of Going Outside?

It is far faster to take the ICW from Charleston to Beaufort. The trip is 75 miles via ICW and probably 125 if you go outside. This is true of almost every one day trip on the ICW - the coastal route is longer. The reason is the distance you must travel out the inlet (I am aware of the juxtaposition of terms but this is how we talk down here). It is two hours to get out Charleston Harbour and the same at Beaufort. But the inlet at Beaufort is several miles south of town so after completing the entry you must backtrack along the ICW. So for short trips the ICW is the way to go.
Posted by Unknown at 12:22 PM