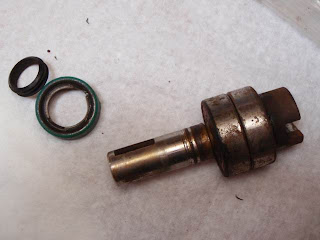 The offending parts - Note the chunck out of the seal and the deep groove worn into the shaft.
The only religion on Meredith is worship of the Diesel. This is not unusual amongst the cruising public as most of us treat our diesels like gods. Sometimes we forget that Mephisto is merely the diabolic implementation of Godhood.

On Douce Folie V Ben and Andree have even named their diesel, Nestor. Ben talks to Nestor for at least 10 minutes each morning before trying to start it. None of us tease him for this because Nestor always starts.

Aboard Meredith obeisance is paid daily in a check of all fluid levels and belt tensions before start.

The sacrificial aspect of this is the torture endured by Bob as he screws his immodest frame into all manner of inhuman shapes to get at the various indicators and dip sticks. Usually this daily immolation suffices to keep contented Meredith's little Beezebub. (On Meredith the diesel is even painted red).

Contentment of the diesel was not the order of the day as we hauled anchor out of Daytona Beach determined to make Titusville by nightfall.

This particular day fluid levels were all acceptable but when Bob stood up the Budget Committee gave a start. A thin smear of oil covered Bob's entire abdomen. As has been mentioned this is not a small surface area.

Looking again at the engine nothing could be seen except a small spatter pattern with no discernable origin.

There were also two drops of water on the raw water pump but the bottom of the outlet hose was also damp and Bob figured there was a small leak there. The budget committee agreed the engine should be checked often while underway.

The first 4 half hourly checks disclosed nothing. The fifth showed increased leakage at the raw water pump which was not from the hose - it was from the pump shaft.

Then all Hell broke loose. Diesel hell it should be noted is different from human hell. Human hell is just hot and you are engulfed in flames. Diesel hell is wet and hot and hot water and dirty engine oil spray over you continuously.

The Budget Committee, assuming Bob had screwed up somehow was unimpressed and expressed her opinion of childlike pranks. Soaked in hot water, his wife on his case and the continued existence of his diesel in the balance, Bob began to think diesel hell maybe was not so different from human hell.

Bob brought the Budget Committee to the companionway and had her put her hand under the shaft, which was now pouring out water out like a little red Manneken Pis.

We limped into Titusville and anchored for the night. Next morning we were up at dawn, moored in a berth and claiming a rental car. The pump was rebuilt by 9:00 a.m. next morning, reinstalled by Bob, blessed by two priests and Meredith was underway for Vero Beach by 11:00.