Head Over Heels in Velcro Beach 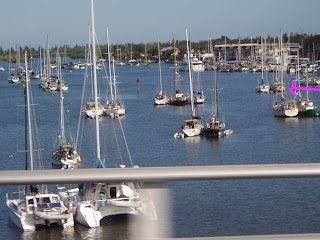 Talk about hot off the press. As I sat down to scribble something bland and favourable about Vero Beach the Budget Committee announced she was leaving to do the laundry. Did I want to give her a ride over in the dinghy or would I rather be stranded aboard Fortress Meredith?

Friends, Gary and Ruth aboard Grace C,expressed sincere ambivalence toward the talents of Miles Davis and played some truly horrible over orchestrated schlock in support of their position. For shizzle. Such blasphemy cannot be tolerated by any accolite of the master.

A DVD with Sketches of Spain and Kind of Blue was burned and ready for delivery, the playing of either a death blow in war against ignorance.

Delivery of the missile of good intentions meant I needed the dinghy and in turn this meant I had to ferry the queen of the laundry to and fro.

I completed uploading the above photo, climbed out of the companionway and attempted to board the Walker Bay.

Now the Walker Bay is a bit cranky these days. She has a leak or PMS or some other female disease and is often to be found depressed and deflated or rather lumpy. Such was the case at hand, not that I noticed.

Stepping down onto the dinghy seat my right foot touched solid material but did not stop descending. After the foot failed to come to a vertical stop after six inches of decline I decided to pull myself back aboard Meredith and survey the situation. This required I shift my left foot just a couple of inches.

The deck narrows just where we board the dinghy and the spinnaker pole is fixed firmly to the deck aggravating the lack of floor space. There was however just enough distance for my sperry deck shoe to ram its sole under the spinnaker pole and lip of the toe rail. The left foot was firmly fixed in place.

The brain takes in all this information but sometimes fails to issue proper corrective orders to the affected limbs. The fact that the right foot is descending without authorization while the left foot refuses to budget despite increasingly strident commands to this effect left the old command centre paralyzed.

Just as the phrase "seruous sprain" pushed its way through the fog of war gripping the gray matter the left foot pulled free. A good thing right?

The right foot is a foot too low and the left foot, now four or more feet above it lets go, leaving Bob to spin on his right foot. But the right foot is poised on a depleted dinghy tube which seems to have no positive buoyancy whatsoever.

The right foot, bound by Newton's third law of motion (if you push on something it pushes back or gives) pushed harder on the deflated tube. Now the second law of motion kicked in (the one that says the harder you push the faster you go).

I executed a neat double axel and finished with a clutz, I mean a lutz.

Finding myself in cold salty water I waved jauntily to the onlookers aboard neighbouring Kairos who seemed be applauding my synchronized swimming skills and called to the Budget Committee to lower the ladder. "Connie" I called softly.

"Give a minute" was the reply from the companionway where my wife was assembling her kingdom of dirty laundry.

"Connie" came the plaintive call, a touch louder this time.

"I am not ready yet. Give me a chance to get organized.".

This was harder than I thought. "CONNIE. I fell in the water. Lower the ladder."

I stayed aboard and let the budget committee helm her own dinghy.

She pointed out she felt safer that way.