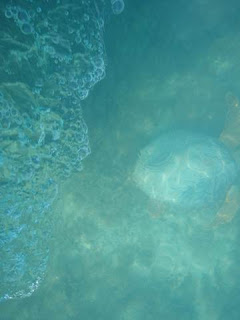 The first stop for most sailors intending to enjoy the Abaco Islands is Great Sale Cay, about 110 nm from Lake Worth Inlet, Florida.

Now a Cay is not much when viewed against the horizon, and most cays cannot be seen from 6 nm away. 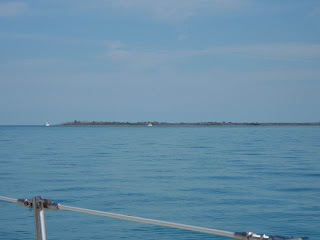 Great Sale Cay on Approach - 2 miles off
Your navigation wants to be spot on. You cross either to Memory Rock or West End from Lake Worth Inlet. If you are watching your depth sounder you see your operating depth move from 450 feet to 10 feet in about 20 seconds.

No playing video games on your chartplotter. Sailing the small Bahama Bank is a treacherous nerve tautening exercise in which the depth sounder rules supreme. It really does not matter what the chartplotter says, if your depth is 5 feet you have problems.

A navigation error of 20 feet off course is all it takes to ruin a good day.

Coming out of West End dead in the centre of the charted route we found ourselves in 6 inches less water than our boat needed to float. Forty Five minutes later we had moved 15 feet to the North and found 7 feet which we had for the next 45 miles into Great Sale Cay.

The depth sounder rules supreme down here and you take your eyes off that dial only at great peril.

Great Sale Cay is one of the nicest sites we have visited in all of the Bahamas. On arrival we were one of 3 boats. Next morning we found several new guests: 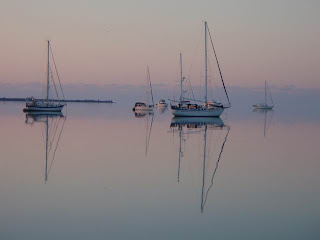 Naturally as soon as you have two boats you have an excuse for a party and Meredith hosted this one: 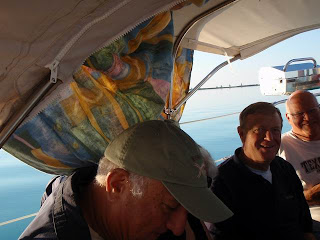 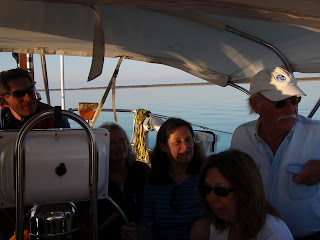 From Left to Right: Crew of Consort, Kitty from Tamare, Ken and Julie from Lee Ann, George and the frontal hair lobe of Georgia of Agapi, Russ from Tamare and Steve from Seeker.

It was a good and fortuitous visit: All of us at Great Sale that night met again at Green Turtle Cay where we have spent near a week now storm stayed under a succession of punishing cold fronts.

On which more later.