Paradise in Many Forms 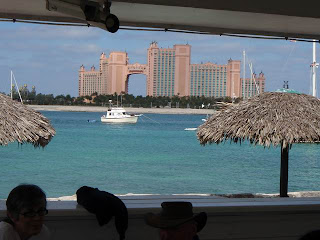 It has been suggested that we are only reporting bad news and some readers wonder when if we will ever start having fun. Actually we are trying to report the more interesting bits not the bad bits.

We long ago decided to live the best life we could imagine. At the moment this is it. There is nothing imaginably better that what we are doing. 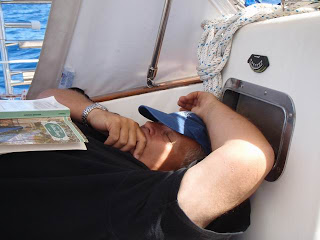 Skipper Bob Ponders a Tough Navigation Problem
Sailing by Windvane From Little Harbour, Abacos to Royal Island NE of Nassau
While the Skipper's old Celestial Navigation class at the Goderich Power Squadron was wrestling with its written exam the crew of Meredith was dining aboard My Bless I in Royal Island Harbour. Our host, Sergio Carvalho, is a retired Submarine Captain in the Brazilian Navy. Captain Carvalho also taught Celestial Navigation at the Unites States Naval Academy in Annapolis, a neat little tie in with the Power Squadron, don't you think?

We met Sergio and his friend Valter in a protected harbour on Royal Island, just at the Northwest corner of Eleuthera Island. Meredith headed for Royal due to its protected harbour. A major storm was predicted and Meredith needed cover.

When it became apparent the forecast storm storm would not materialize as forecast the mood grew festive and we agreed to meet aboard My Bless I for a celebration. Connie and Valter cooked up a storm, Bob brought movies and charts to trade and Captain Carvalho warmed up his bartending skills.

The Captain's specialty is Caipirhina - A Brazilian Drink of Muddled Limes, sugar and Cachaça, a sugar cane alcohol. On hearing that skipperbob served a variety of this drink at Sock Burning Party #1 the Commander insisted on showing the skipper how to do the drink properly. In several variations. 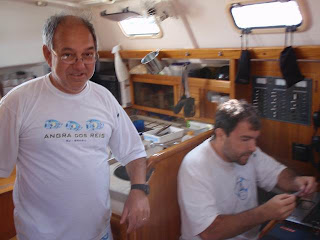 Captain Sergio, on the Left and Valter
Installing some Weather software the Skipper traded

Valter is a cool guy who just bought a used Delta 36, made in Brazil, and he and Sergio are sailing it home. Valter needs to make it a slow trip because his wife, who is now divorcing him, is unaware of the boat's existence and he is concerned the judge might not believe his plea of poverty.

It was without a doubt the best storm of our trip.