Puttin in Time on Planet Earth, Watching the Fireworks up Very Close 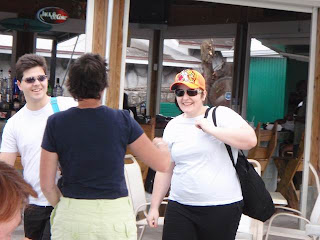 Nick and Linds find the Parrot.
I put down my drink long enough to take this.
It is now 15 seconds old. I was ready.

Waiting at the Parrot for Linds and Nick.

Watching the third of two forecast cold fronts move through in 2 days. It is overcast, windy and cool. Relative I know but cool none the less.

Friday evening was very interesting in the Nassau anchorage. Just after dark a self propelled barge moved into position about 50 yards from Meredith. It appeared to be stationary. Odd but then in Nassau you get used to it.

We retired about 9:00 p.m. and were soon sound asleep after a busy day buying discount liquor - Belvedere Vodka for $29, Crown Royal for $12, Bacardi 12 year old for $17 (LITRE bottles dude). Lot of work hauling that home. And then the tasting. My goodness. We were quite enervated let me tell you.

About 10 p.m. we both woke with start. That is what they would say in polite novels anyway. Bloody hell erupted on Meredith. BLAM....BLAM....BLAM. First thought for each of us rousing from a deep sleep was "The Boat is Lost, We're Going Down". No boat could withstand the impact of the blows we heard.

Wait a minute. We heard them. No impact. What the hell? The barge was the firing station for the weekly Atlantis Resort fireworks display. The show had just begun and when we hit the cockpit - naked of course, I mean really - it was just warming up.

We sat literally beside the firing station and saw the best fireworks display of our sheltered lives. A few moments of concern as flaming debris hit the deck and water around us but the deck wash pump took care of that.

My life may be 5 years shorter but what a blast.

Nick and Linds just walked in so gotta go.
Posted by Unknown at 12:02 PM