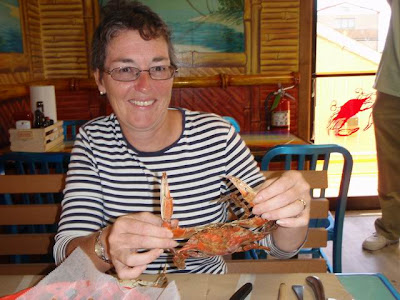 Connie wrestles a Crisfield Crab over dinner.
Gang war is a serious ongoing social issue in Crisfield: Marauding gangs of Crabs are attacking innocent diners. It's a dog eat dogworld down here and the issue is always reduced to: who would eat whom.

Crabs have a highly developed social order and only crabs of the same size band together. Large crabs group together as do medium crabs. They attack in groups of 12.

Although the crab pictured above had the advantage of surprise it was handicapped by its drug habit: a serious addiction to Old Bay spice. This drug habit is endemic among local crabs in the Chesapeake.

The steam bath before the match probably tired him out too.

Connie advised that it was worth the effort.

When not defending against marauding crabs we spent our time at the crab skiff races: 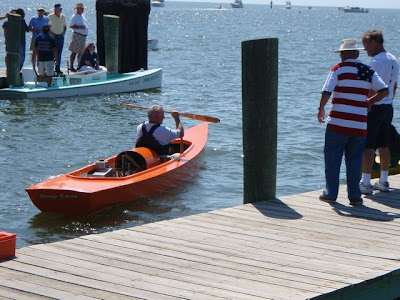 Innocuous tiny little things, crab skiffs were used to fetch crab pots from the shallows and shoals that abound in the Chesapeake. Narrow, small, shallow these fair little craft could darn near sail over dry land.

Now they are playtoys of the Tim Taylor Crowd. They are raced. Here is how a race starts: 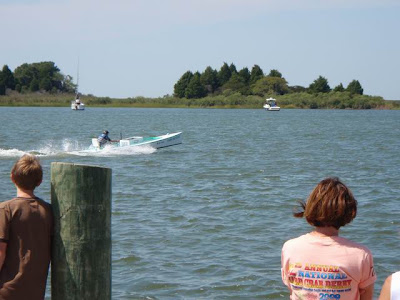 Catch the lift on this thing. He is on the straightaway completing his first lap.
The owner of Kissed by a Minnow installed a small block V8 in his. 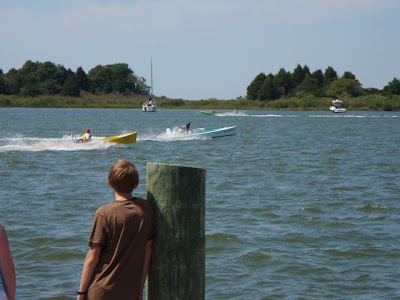 The racing is ferocious and no one gives an inch. 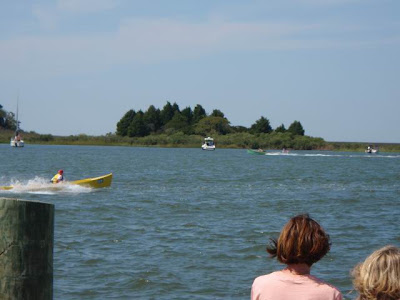 The winner of this race was Old Bay.

However, as the Announcer said:
"Here Goes Old Bay. Piloted by *****, the pride of Matthews Virginia. He's also a bit of a cheat."

The cheat reference was to the fact that Old Bay departed 1 full minute ahead of his handicap.

The race announcer repeated that Old Bay cheated every lap. As a result of the dishonourable conduct of Old Bay the boat was disqualified and the race won by the Pride of Crisfield, MD.