Bob Sulks in a Corner 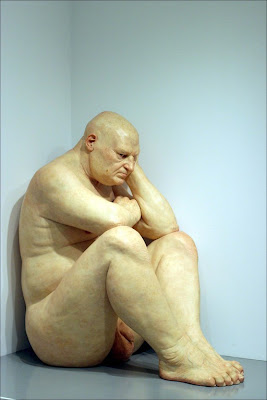 Ron Mueck's "Big Man" at the Strange Bodies Exhibit at the Hirshorn
A Doppelganger?
Why has the Skipper's changed his attitude to the big Wash? Since you ask, it was Captain White's Seafood and Crabs a marvellous below grade fresh fish merchant which is located a short dinghy ride across the river where Meredith is anchored: 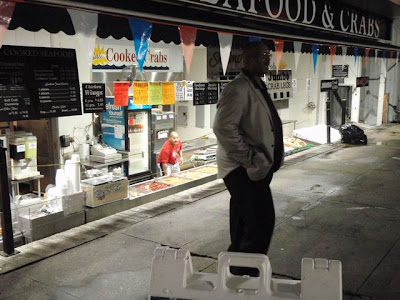 Look Down, Look Way Way Down Rusty
Captain White's is sort of underground culture
The market is located on the waterfront but below street level. You stand on the street, looking down at the catch displayed for sale and place your order. Everything is good and fresh.

Tonight we rowee over to Capt White's long after dark to get some shrimp. Having secured to a barge adjacent to the store Connie was attempting to ascend the 5 foot ledge left by the fleeing tide. I was admiring her form from below. Three very tough looking Dominicans started towards us. As they neared you could see their craggy scarred faces and the evil tenor of their gaze. The scars were obviously from knife fights.

Halfway up the barge Connie found herself unable to proceed either up or down without unpleasant consequences.

The Dominicans approached at speed.

"Let me give you a hand Ma'am" said the toughest of the bunch. With that he reached down, grabbed Connie under her arms and lifted her in a single graceful motion to the top of the barge.

"This place has the best seafood in DC" says our benefactor. "We drove in from Delaware right after work tonight just to get some. My man Hector will set you up real good."

Hector did just that.

The guys were tired and headed to their car directly. 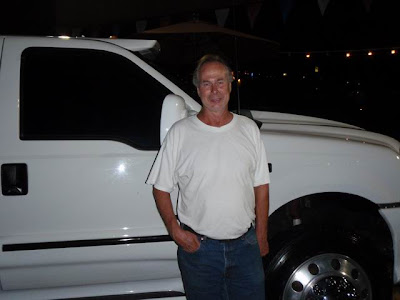 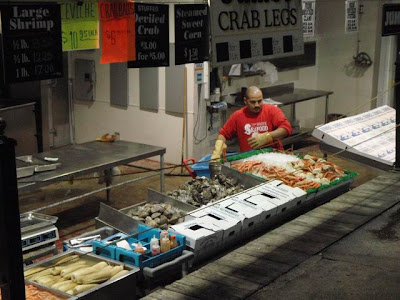 As we ordered and talked to Hector a strange looking dude with a slow drawl approached us. From his dress and speech we figured he was a panhandler who was already well into the bottle.

It was the same Captain White who owned the joint. He wondered about our taking pictures (and interrupting his workers, no doubt). Sensing his interest in the pictures we called on advice from friend Randy Chamberlain, the TV guy, and played up that we wanted a photo of his very unique establishment for our blog so those that followed would know where to get some of the best seafood on the Chesapeake. No lie in any of that.

Conversation flowed. The Captain has owned this below the street seafood store for 37 years. He explained that this was just Phase 1 and the barge we tied up to was going to be Phase 2. It has been a while in the "planning" stage but is coming very soon he promised. We had a great talk.

He even posed for a picture.

Being our last day in the big Wash we wanted to see the touted Darwin Exhibit at the Natural History Museum. The display was shallow and disappointing and the hall was full of defective genetic material running around and screaming and having fun as if they were 10 year olds.

Realizing it was we who were out of place we left and spent the rest of a great day at the Smithsonian Hirshorn Museum and the Sculpture Garden. No kids, no tourists. Only the Big Man pictured above.

Prior to this trip when I thought of the Smithsonian I always thought of a big fancy building, ala the Guggenheim, full of cool exhibits. Perhaps you share this unsupported thought. You are as wrong as me.

In fact the Smithsonian is a collection of 19 museums and galleries each with its own massive exhibit hall, many of these with unique gardens filled with statuary, landscaping and cool stuff.

Admission to all exhibits is free.

What a treasure.
Posted by Unknown at 3:34 PM