Does This Look Like Luck to You?
This Photo taken this afternoon shows fuel
sampled from the supply line to the Tohatsu.
The Horizontal Line demarcates water - below the line
and fuel - above the line

The Outboard ran fine for 5 days and then started to act up. But it still ran.

Yesterday (Monday the 19th I think) we left Annapolis in cool, not cold, weather heading for Solomon's Island, our first stop on the way south from Annapolis as we leave the Chesapeake. Spending a week of forced inactivity due to the Nor'easter left us in poor physical condition for an 8 hour day on the water. By 8:00 a.m. we were up, had had a coffee, and were waiting for the temperature to climb to something requiring only 4 layers of fleece under the offshore jacket. That moment came at 9:30.

Sails up in anticipation of the forecast 20G25 winds and 4 foot waves we counted 25 masts ahead and behind us, all headed for Solomon's on leg 1 of the run south.

Within 2 hours most of the surrounding sails were furled or flaked. Actual wind was 10G12 not enough to drive any of the boats Our main was so wet from 5 days of rain we left it up for another 2 hours just to dry it and air it out.

About 4:00 p.m. we rollled into the labyrinthian system of creeks, streams and rivers that subdivides Solomon's Island into dozens of smaller parcels. There are miles of beautiful protected streams in which you can set your hook. But that has nothing to do with the post.

Just as we come past the last red marker we were attacked by a well groomed couple in a high speed dinghy. Tony and Linda Sellick, owners of OneDay out of Bayfield Ontario and slip mates of ours back home had spied us as we entered.

We had not seen OneDay since a blustery afternoon in Nassau back in January.

Tony had found a great protected and uncrowded anchorage up Leeson Creek he told us. "Lead On" was the order from the helm and sure enough we were delivered into a placid pool of tranquility. Good holding, no noise and decent neighbours.

We invited OneDay to join us at the Holiday Inn for Happy Hour - $5 appetizers and $1 draft but Linda had already started dinner. They informed us that Randy Chamberlain and Donna Querenguesser, friends of Meredith for years had docked their converted Bertram fishing boat Babykiller B at the Holiday Inn Dock.

This was looking up.

We dropped the outboard onto the dinghy using our patented backstay-handybilly-wifeondeck outboard hoist and set off for Babykiller B and a cheap night out.

That worked for about a minute. We stopped to talk to a Canadian boat that had followed us for most of the trip south and which had anchored only a few meters away. Departing for the bar from that boat our dinghy made about 50 meters and quit.

We were just getting the oars out to row home when Tony, noticing our plight from his cockpit, came over in his dinghy, also powered by a Tohatsu 9.8, and gave us a tow. As he towed he asked us if we wished to come by for a drink.

Beer on OneDay is even cheaper than beer at the Holiday Inn and Linda put on a great spread of beer accompaniers. Tony showed me his Raymarine 80 Series chartplotter/radar with the cool overlap feature and, as sailors do, we discussed failures and how we overcame them. 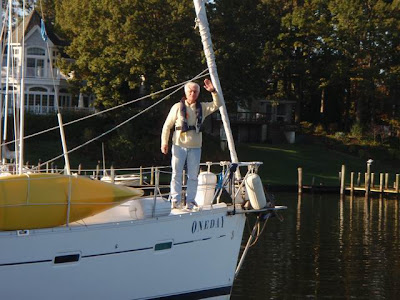 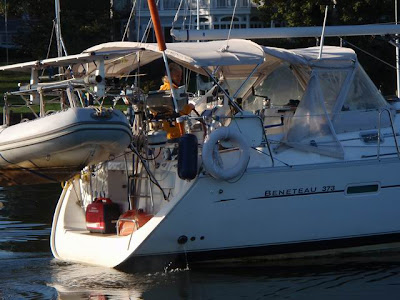 Tony and Linda (Honest She's In There)

Rowing home we slept well deeply burrowed into the duvet.

Next morning I set to finding some parts for the Tohatsu realizing that I was going to have to tear down the carburetor again. This time I was resolved to replace the gaskets as the old ones were cracked and swollen.

Firing up the Acer netbook I went immediately to the site I had bookmarked which offered fast delivery of parts at reasonable prices. I reasoned we could avoid going ashore until Elizabeth City and have the parts shipped there.

The online Tohatsu parts place had its one and only place of business in Solomon's. No kidding. Right in the town we were in.

I made up the order and emailed. Immediately I called the phone number to see about pickup of parts.

The gruff and direct voice on the phone confirmed the order but informed me he had moved his stock to his house for the off season. Bummer. However he offered, if I could get someplace in Solomon's he would be happy to drive the stuff to me.

Luck the Fifth and Sixth

Our friends Randy and Donna on Babykiller B were planning a late departure (seeing as how they make 25 knots an hour while underway). They agreed to accept delivery of the parts - oh, and would we like to come by for coffee and showers?

The Babykillers are oft teased about their espresso machine - the first alteration they made to their 30 foot fishing boat as they readied it for cruising. Teased maybe but we have never been dumb enough to turn down a coffee made in that phenomenal device.

30 minutes later we were sipping lattes in a warm Bertram 30 getting our towels and soap ready when the parts guy shows up. He had added a fuel filter and spark plugs to the order. "If you fouled the carb you fouled the plugs my friend". I agreed and thanked him for his superior vision. 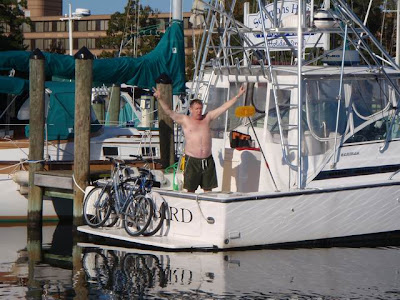 Randy on Babykiller B his Bertram 30
which travels under the nom de fin Snowbird
Caffeinated and scrubbed we bid farewell to Babykiller B and returned to Meredith to remove and clean the carb.

That job done and the Tohatsu running just as it should if I wouldn't feed it water instead of fuel, we planned to hit Happy Hour. Connie, who had been sewing all afternoon when not helping me bleed gas lines, felt we had earned it. Where the Budget Committee goes so goes the boat.

When we moved Meredith to be closer to Babykiller B we anchored just off the Holiday Inn. Immediately in front of us was Mystic a Hunter 42 we first met in Waterford NY last fall. They joined us for Happy Hour as did the crew of Duet a Passport 42 which had seen me working on the Tohatsu and come over to make fun.

The book is closed on today but I can tell you I will not buy a lottery ticket for a long long time. My luck has been running too good to mess with.
Posted by Unknown at 1:00 PM