In the Bottom One Percent 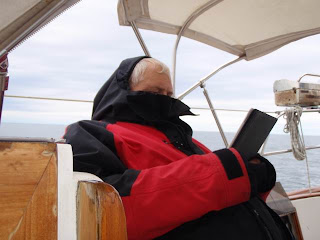 It was a glorious playing out of what had been an inglorious escape from Halifax.

After a successful 2 week furlough in London, Ontario to visit family and friends we knew we were cutting things close for sailing out of Nova Scotia.  September is not a sailing month out here, not even the glorious September that this city has enjoyed this year (discounting Hurricane Earl of course).

Our arrival at the yacht club in Halifax on September 21 was ill timed.  We "forgot" there was an hour time difference.  The Atlas misreported the distance from Moncton to Halifax as 178 km while it is really 278.  Rand McNally is hearing about that one.  We arrived in Halifax during rush hour.  The car rental clerk was working alone and could not drive us back to the marina.  We got lost.
If I believed in auguries...
Arriving at Armdale Yacht Club we loaded up the tender with baggage and groceries to be ferried out to Meredith.  The usually taciturn tender operator was unusually talkative.  Almost effusive.  He offered the observation that we were the first people to use the tender in 2 days.  He did not expect to be piloting the tender at all for the rest of the week.

His loquaciousness knew no bounds.  Several boats were being hauled out at that very moment he informed us.  In the local way that prompts blunt talk to be clothed in light disguise it was proferred that it was possible we were viewed by the yacht club members as a bit odd.   No one cruised NOW.

Intending to head out next day making for Shelburne from Halifax we spent the day aboard doing nothing as wind howled out of the Southwest at 25 knots and waves were 2 to 3 metres.  Right on the nose.  It was a bleak day.  The wind seemed to echo the tender operator's words: No one sails NOW.
On the 22nd September we found ourselves away.  Dressed like Scott of the Antarctic perhaps but underway.
Two hours out the wind died to 5 knots leaving just its waves to remind us of its presence.  As we have done so often since Montreal we turned to the Beta and sought its reliable aid.  At 2:00 a.m. we numbly pulled into Shelburne, in the dark under a glorious full moon.

We picked up a mooring ball in the dark and quit for the day.   Tomorrow we knew we could sleep in: the fuel dock in Shelburne does not open until 9:00 a.m. ADT which is 8:00 a.m. on our clocks.  Still this was a 2 hours reprieve.
Our plan from Shelburne was to make directly for Cape Cod Bay crossing both the Bay of Fundy and Gulf of Maine in a single 220 nm leg.  The morning weather report scuttled that.  Winds out of the South blowing to 20 and more.
There is a huge tide in the Bay of Fundy which a South or South East wind will quickly render uncomfortable and all too soon dangerous.    Coast Guard operates a life boat out of Clarke's Harbour on Cape Sable Island right at the southern tip of NS just to account for such situations.
Our plans needed a change.
While in Shelburne we found two other cruising sailboats eager to  get underway.
We are reliably informed that somewhere around 300 to 400 boats visit Nova Scotia each year.
So we were one of three boats left in the province.  Out of 400.
Talk about bottomfish.
Posted by Unknown at 3:30 PM