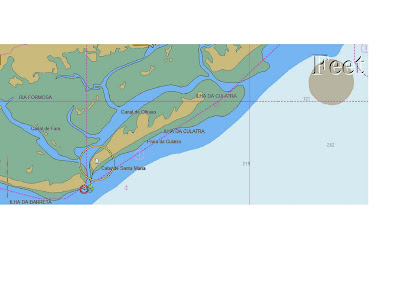 It was a short trip from Portimao to Culahtra, no more than 25 miles.  After a month off,
sitting in Portimao, it was tiring enough.  The daily landbreeze, blowing every night from
land to sea at 20 knots give or take 3 knots, held until about noon after which we motored
until the seabreeze picked up to similar velocity from the opposite direction.

The south coast of Portugal and Spain exhibits strong land breeze every night and strong
seabreeze every day.  Of course there is a two or three hour gap around noon while the sun heats the land enough to stop the flow of air from land to sea and then recommence the flow in reverse: from sea to land.  Each day begins with 20 knots off the land which subsides as the day progresses.  Each afternoon sees development of wind from sea to land which strengthens, usually to the 20 knot range, as the day progresses.

This can be an issue if, late in the day, you are coming into a river at ebb tide.  The wind will be a good 20 knots blowing against the tide giving very unpleasant chop.  Worse if you are unlucky.  Most of the rivers on the south of Portugal have shallow narrow entrances so attention to tide and time of day is important.

OUr first plan was to stop for the night at Albufeira only 15 miles from Portimao.  There was no protected anchorage and by the time we had arrived the seabreeze was kicking up a strong rolly sea, too rolly to risk anchoring off the beach which is commonly done.

A quick check of the tides showed we would have flood tide entering the waterway between the island of Culahtra and the mainland.  We changed destination.

Culahtra is really just a big sand dune separated from the mainland by a two mile wide waterway.  Two large rivers flow into this waterway so there is considerable tide.  The mouth of the entrance can exhibit tides of 6 knots or even higher.

Once inside there are three anchorages from which to choose.  One, just at the mouth of a
river leading to Faro, a major city is wide open to wind and waves and tide and was just
ugly.  The second anchorage was so unobtrusive we sailed right by without being able to
discern anything obout it which showed promise.

The third anchorage, located just off the city of Olhao at the North east end of the
island, is decent enough.  Still open to tide and of course current from the river leading
to Olhao the anchorage is protected from waves on the Atlantic and is close to the island
of Culahtra itself.  Our hook was dropped and considering the currents in which we would
find ourselves we dug for China with our anchor.
Posted by Unknown at 1:06 AM