Our first night at Manganari Beach things meteorologic blew up and conditions grew interesting.  Manganari is a famous beach on the southern tip of the Greek Island of Ios which back in the wild days of our youth, the 1960s, were the scene of "living rough".  Young twenty somethings burdened with nothing more than a backpack containing a change of underwear and the unshakeable sense of their own invulnerability, invaded Greece.  They slept on the beach, stole what they could not afford and attempted to "backpack" their way to greater enlightenment aided by the then current bevy of psychodelic mystic mood enhancers.

They were also all looking to get laid.

Manganari was one of geographic focal points for the convergence of all those baby boomers proving their individualism by joining everyone else in the great generational hitchhike of planet earth.  These were Joni Mitchell days and they were pretty heady stuff. 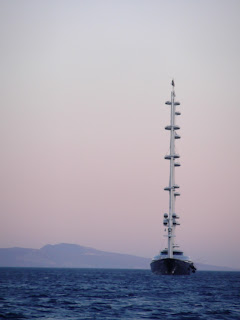 Anyway as dark fell over the mountains protecting the beach the wind and its gusts grew.  We had chosen, as always, an anchorage with great protection from waves so we sat comfortably in our cockpit watching the sunset.  In the dimming light there entered the bay the most amazing sailboat we have ever seen: the Maltese Falcon.

A few hundred meters directly off our stern, the captain of this wonderous machine dropped his anchor and payed out rode, just like a real sailboat.

That evening, until the failing of the light, we sat taking in the magnificence of the device floating behind us.

Next day Connie turned on the AIS to see what vessel this was.  It was the "Maltese Falcon" ,by one measure the longest sailboat ever built at something over 300 feet.  It is reputed to be the third largest sailboat in the world today. All the details are available on the web but here were some that interested us: 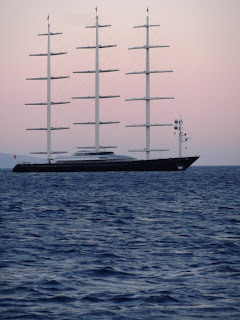 purchase price: $97 million (a steal.  It was listed at $177 million by its builder, billionaire Ted Stephens)

It carries its own private submarine.

These are things you do not expect to find sharing your accommodation
Posted by Unknown at 11:52 PM