There are 3189 Stories in the Quaint Little Village; These are Four of Them


The past few posts should have established that we are in fact enjoying ourselves in the Med taking in all the sights and history and culture.  That we have not yet climbed on a plane and headed home was a good  clue as to the state of things aboard Meredith.  Like Malta, if we do not like a place we just haul anchor and leave.  Undisputably this is one of the joys of cruising.

This post will move us back onto a philosphic plane that is more to our liking.  We move away from the travelogue and back to episodes that we think demonstrate character of an area, or help those who come after us or give our location to family and boaters with whom we are traveling.


Galaxidi is a pretty town.  if you are anywhere near it on your boat you should give serious consideration to stopping.

Almost every town in Greece is pretty.  The houses are all white and tiny, built usually at water's edge in the crevice of two mountains or, under pressure of population growth, up the sides of those mountains like a white and blue vine.  The streets are winding and narrow.

To a Greek there is nothing quaint about this.  This is how Greeks live.

Add eight feet of snowfall a year and a freeze thaw cycle that would remove the molars from a sleeping polar bear and these towns could not exist.  in Canada they could not exist.  This does not detract from their beauty but I like to keep things in perspective.

At the same time there is so much more to Galaxidi than sprays of bougainvillea and views of the sea.


The original town of Galaxidi was utterly and completely destroyed by the Germans as they retreated out of Greece in the second world war.  Much flows from the story of the destruction of Galaxidi, relayed to me by several residents of the New Galaxidi.  Clearly the demolition of their home will not be forgotten or entirely forgiven.

Quaint Galaxidi is not historic.  This quaint old style Greek village is perfectly modern, all new construction.  It's quaintness flows from its Greekness.

If you mine the collective memory of its destruction, a vein that lies so close to the surface of the inhabitants of this town, you learn a few things.

In WWII the Greeks, bordered by Italy and Germany on one side and Germany's Arab allies on the other, chose to align themselves with us, a gutsy play.  Italy invaded Greece, but being Italy began almost at once to be pushed back by gritty Greek fighters.  Finally to save Italian egos Germany was forced to commit troops and resources to shore up the occupation.   Germany then destroyed this quaint town when it began to fall to allied military pressure and its own fatally flawed Nietschean insanity.  I find Galaxidian (and Greek) character disclosed by the story of the town's destruction quite endearing.

You wonder how this village can be so accommodating to the German boaters who arrive every day in their big Bavaria 40 somethings, backing badly onto the free dock, using the free water and free electric and then  not eating at the local restaurants or frequenting the bakeries or markets.   You also wonder how the Germans have the nerve to even show up in this town that they destroyed.  I get that it was not them but their fathers who destroyed the village and that the sins of the fathers should not necessarily be visited upon the sons however were I German I would be embarrassed to ever come here.  It would be difficult for me to show my face in Dresden for similar reasons.

Of the local restaurants we preferred patronizing Mary's Liberty Cafe, located only steps from our bow on the dock.  The Liberty Cafe has been owned by Mary, a quiet unassuming woman,  for seventeen years, a fact she relays with a good deal of pride.  Obviously not all of the seventeen years have been easy and she is proud of her achievement.  These days Mary lets her son take charge.  He is eager and willing and is learning fast.  Our third night we shared drinks on the patio at the Liberty cafe and we left a tip.  A small tip as we find tipping is not always appreciated in Europe.  The young man was initially horrified that we had overpaid and came running after us, thinking we had left too much money by mistake.  When we explained it was a tip and that we appreciated his efficient service he faltered for a moment.  Really.  Struggling to control a wvering voice he explained that he was trying hard to learn how to run the business and that he worked hard to meet everyone's expectations.   He explained that now he could tell his wife that he was doing better.  "She is from New Jersey.  She will believe me now that I have a tip".


Then there is the dockmaster.  He is superb at his job: marshalling visiting sailboats to the waiting docks of his town.  This is not an easy job given the fact that many visitors are inexperienced sailors medmooring to a dock that was constructed so it was perpetually in a crosswind.  Under his vocal tutelage boat after boat was landed with nary a hitch.

The man never wore a shirt, never wore shoes, never was without a glass of wine or a bottle of beer in hand, never was inebriated and never spoke at anything less than full volume.  I think years of trying to make sense to tired cruisers has broken his volume control.

Imagine sitting in blessed silence in your cockpit as a boat enters the quiet bay for a look around.  Moments later the dockmaster comes flying down the hill at full speed on his bicycle naked from the waist up yelling instructions at the top of his leather bound lungs to the poor boater.  He adopted us for some reason.  Once he learned our names he liked to use them.  Over and over.  "BAWB" he would yell, "BAWWWB".  I am going to the square to buy two litres of wine".  "CAWNNIE, BUS AT THE SQUARE.  BUS COMES AT 7 OR MAYBE 7:15 OR 7:30.  I DON'T KNOW FOR SURE BUT FOR SURE IT COMES".


In the south east corner of the harbour at Galaxidi there floats a small wooden house.  It is for geese.  There are many geese, white of course, and they roam freely.  The town takes care of them.

No fools the Galaxidians, they wear decent headgear to protect them from the sum.  They wear it all the time. 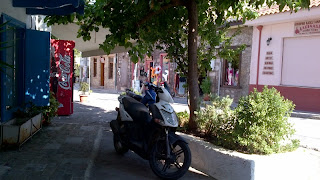 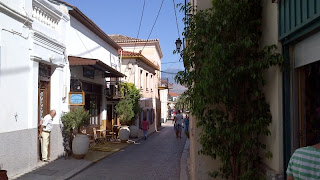 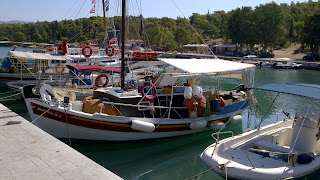 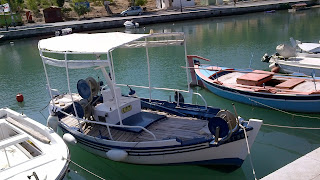 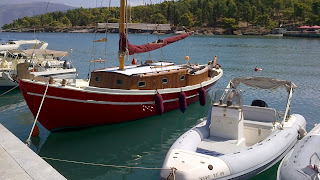 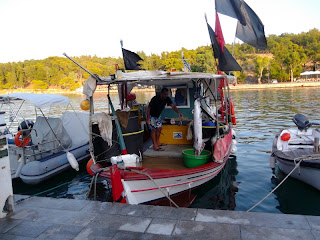 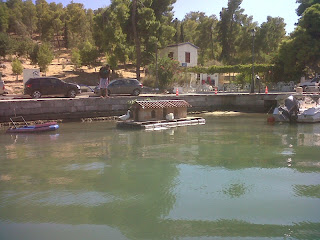 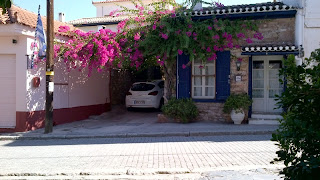