Yesterday we left Hampton heading for Elizabeth City. We chose to take the Dismal swamp because it is very pretty and very protected. Winds were forecast at 25 kn. but we had only the mouth of the Elizabeth River to cross from Hampton to Norfolk.

Things did not work out as planned.

Winds were 30 gusting 35. The tidal current was 180 degrees opposed to the wind and it came over a very shallow bank which divides Hampton from Norfolk. Waves were a good 6 to 8 feet and short frequency. Meredith loved it.

Connie and Bob less so.

A nuclear sub chose the moment of our crossing to exit the harbour forcing us to beat directly into the waves to avoid being blown to kingdom come by the Coast Guard escorts. There is a 1,000 foot exclusion zone around all military vessels at sea. We generally keep as far away as the guys with the big machine guns tell us to, in this case they wanted the entire channel. We did not object.

Cool sub though. We were a bit busy handling the boat and did not get a photo.

Coming into Norfolk we were struck by how empty the docks were. The US is floating just about every piece of hardware they have on the East coast. That tells you something about the state of world affairs.

The wind and fetch died down to manageable proportions as soon as we found the shelter of the river.

We did see a couple of neat ships and, my personal favourite, three aircraft carriers: 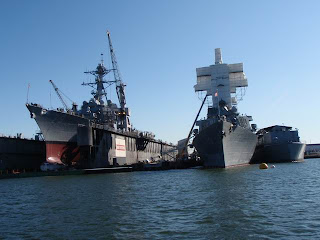 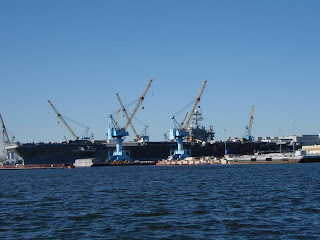 Leaving Hospital Point at Norfolk, the official Mile Zero of the ICW, we made our way under the Jordan Bridge, first of many bridges whose opening we must beg of not always accommodating brdigemasters.

Gilmerton Bridge, bridge no. 2, was such a bridge and four boats waited 40 minutes in 25 to 30 knot winds and 1.5 kn current while the bridge operator found the "up" button. She carried this on all day from the radio reports we heard.

Just after the Gilmerton bridge is the turnoff for the Dismal Swamp Canal.

Our first trip down the waterway we missed the entrance. It is not marked save for a small sign with VERY SMALL lettering which no ordinary mortal could possibly read.

The canal is locked at both ends to prevent the canal from draining the swamp which would be an ecological disaster. Approaching southbound you enter at Deep Creek Lock.

There we learned that weather conditions we such that the canal was full and there were no tie ups over its entire length. The voluble lockmaster, Rob, also informed us that all anchorages and moorings to Elizabeth City were filled with boats waiting out the high winds before braving the Albemarle.

We tied up just inside Deep Creek Lock, rafted to "R.J. Greenstone" a boat we first met in 2004 while heading down the ICW near Oriental, NC. 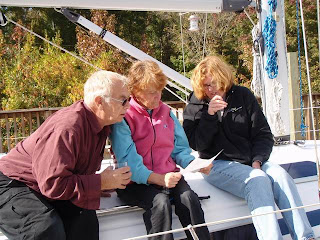 R. J. Greenstone had been tied up for two days waiting out weather.

Today's forecast is 25 kn as is tomorrow's.

Good thing we are good company.

Here Dave and Laurie Burt go over their boat card design with Lynn from the boat tied up behind them. We are tied up to Dave and Laurie's boat as we take this shot from Meredith.
Posted by Unknown at 5:18 AM