We start today by letting you in on a little secret. For the last 200 hours Meredith has been misperforming. Starting in Oswego she missed a shift into forward gear. It was delayed for about a second. Not critical but a caution. The last time Meredith started missing shifts we lost the whole transmission in about 100 hours.

The problem did not recur until Waterford and then again in Great Kills.

We knew what was up. A quick search on the web and we found Dave at American Transmissions right here in Annapolis. Dave was well recommended by a couple of cruisers online and when I called him I was favourably impressed.

The yard Dave recommended (to do the work of removing the transmission and replacing a new or refurbed unit) estimated it would cost $900 or more for the labour plus the cost of marina rentals for however long Meredith would need to be in the marina plus a haulout if necessary plus aything else that might arise.

Well, you know how this one ends. 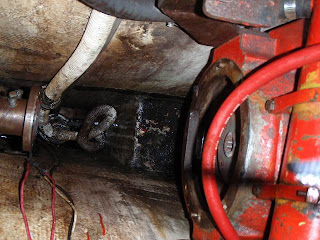 Anything missing from this drive train?

What would have filled that big black hole is this, seen being winched up through the lazarette by me dear wife, Constance. 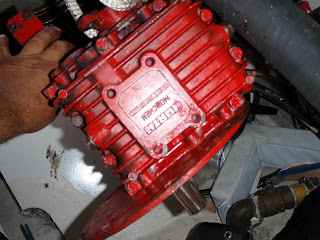 Taking a break from removing transmissions, which is a really ornery job on a sailboat (and maybe anywhere else, how would I know?) we took the bus system to the local big mall.

The bus system seems really simple. Each of the routes is colour coded so you take, for example, the Yellow Bus downtown or the Brown bus to the mall or the Green bus to the street that has our preferred dinghy dock.

Well, the simplicity escaped us today. Turns out there are TWO Brown buses, A & B and two Green Buses, East and West, and the Gold B bus only runs on Sundays and evenings and...

You get the idea. Also there are no transfers. Sort of. you can transfer at a "transfer point". The transfer point is not shown on the transit map. But then the transit web site said there was a $2.50 day pass. The driver told me not to read the internet. When he asked for $1 fare I said the transit sign, printed on steel at the bus stop gave the price of $.75 he told me not to believe everything I read. Message received I paid the $1. 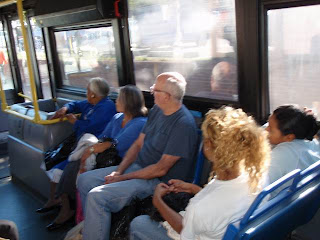 The bus drivers are training for NASCAR in this city too. They are speed demons. While they drive a gallery of passengers, shown here on the Green East Bus, yell suggestions to them and
insults and tell them jokes. Constantly the drivers are being interrogated by a harsh radio controller who is not at all pleasant and wants frequent position reports.


Finally I must t 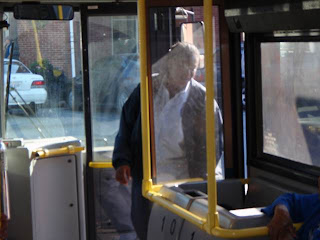 ell you about Mary, the driver of the Red bus, I forget which route. We caught this bus out of the mall heading for a transfer point we did not then know existed. Mary was the driver. At one stop we picked up a very slow moving elderly woman. Along the route the woman stands up, moves to Mary, the driver, and asks if this is her stop. Mary of course does not have a clue. Mary queries the elderly woman about where she lives and where she is going. Finally she opens the lady's purse, looks closely at her ID, turns to the fully loaded bus and says "Does anybody mind if I take this lady home?".

No one demurred. The elderly woman was delivered to her door and we proceeded to the transfer point. At top speed I must say.

The photo, which is tragically inept, shows Mary returning to her (our) bus after she escorted her needful passenger to her door.

Impressed in the extreme.

By the way in Annapolis White people drive SUV's while talking on the cell phone. Blacks and occasional whites take the bus. The bus is a lot more fun.

We have decided to be only occasionally white cause whitey is just too square.
Posted by Unknown at 3:37 PM